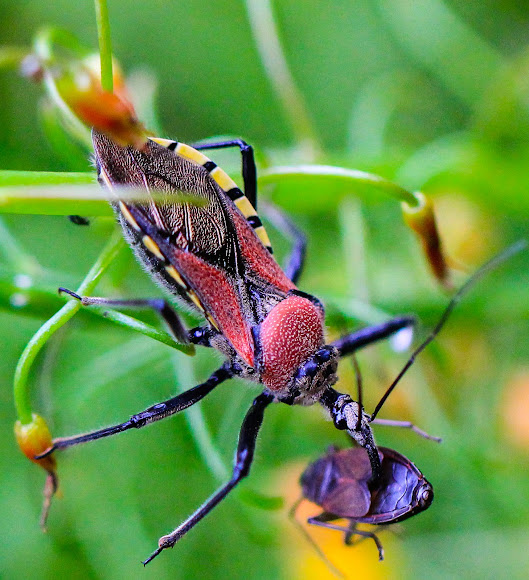 A medium sized and very conspicuous ambush predator form the order Hemiptera (True Bugs). Assassin bugs are robustly built and prey on other arthropods using a powerful recurve beak or Rostrum, that they keep sharp at the tip by rubbing on a ridged groove under the body that often produces a sound. The Flower Assassin is a colourful critter with the red thorax and yellow and black srtipped margins of the thorax. It hunts for prey in expossed sunny areas on plants and flowers and often takes bees and shield bugs. The bright colours are warnings amoung its kind to predators as it can use its beak to inflict a powereful bite to defend itself. In humans the bite is painful resulting in numbness, general welts and nasuea (usually from shock). Anit acid like bicarbonate of soda as a paste can releive symptoms which can last for months afterwards. Until recently it was thought the same venom saliva used to liquify the innards of its prey is also used in defence. However it has been found that two venom production sites exist. The 'hunting venom' is produced in the anterior main gland. The 'defence venom' is produced behind it in the posterior main gland. These glands plus a third auxillary gland all feed into a structure called the hilus, described as a set of muscle-controlled mixing chambers. The defence venom had no effect on small prey animals but caused alot of pain in larger animals. https://cosmosmagazine.com/biology/when-...

Open bushfelt and gardens on the edges of tall vegitation.

Not to be confusted with Sunflower Seed Bug which is a type of shield bug with a similar colouring. The Multiple, thin flower stems of the plant bulbine fructescens made it difficult to get close without disturbing the subject which simply moved around the plant stem or further down. Sadly, only got one shot with prey animal out of focus.

This one is gorgeous! Great shot too, carrying its prey.

Hi Tukup. Many thanks for the kind words. Had a lot of fun with this one. was very shy to photograph :)

Many Thanks Niel. Dont worry, its been a busy start to the year. I have not been om PN as much as i should. Missed a few things myself. :)

How did I miss this one? Great spotting.

What a colorful assassin bug!

Happy Weekend everyone and thank you Ashley for the nomination. Many thanks Leuba Ridgway for your kind words. Very happy one came out :)

A single shot, nevertheless a brilliant one ! Thanks. That's a handsome bug.

Many Thanks Zlatan Celebic .... and thank you so much for all the likes and comments :)