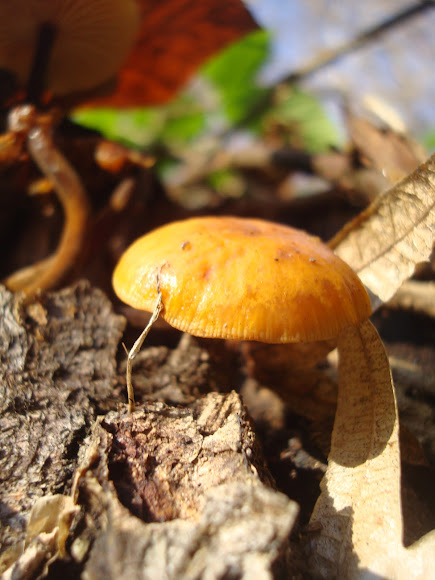 The fruit bodies of this fungus have brown to yellow-brown caps that fade in color when drying. The gills are brownish and give a rusty spore print. A well-defined membranous ring is typically seen on the stems of young specimens but often disappears with age. In older fruit bodies, the caps are flatter and the gills and stems browner. The cap reaches 1.7 - 4 cm in diameter. It starts convex, sometimes broadly conical, and has edges (margins) that are curved in against the gills. As the cap grows and expands, it becomes broadly convex and then flattened, sometimes developing a central elevation, or umbo, which may project prominently from the cap surface.

This one is growing on hornbeam trunk. It is widespread in the Northern Hemisphere, including Europe, North America, and Asia, and has also been found in Australia. It is a wood-rotting fungus that grows predominantly on decaying conifer wood.

The species is a classic "little brown mushroom"—a catchall category that includes all small to medium-sized, hard-to-identify brownish mushrooms, and may be easily confused with several edible species. An extremely poisonous species, it contains the same deadly amatoxins found in the death cap (Amanita phalloides). Ingestion in toxic amounts causes severe liver damage with vomiting, diarrhea, hypothermia, and eventual death if not treated rapidly. About ten poisonings have been attributed to the species now grouped as G. marginata over the last century.

Or a Spore print would settle it. It's a very usfull thing to do when trying to identify mushrooms.

Due to the cap's striations around the margin and the two tone property of the cap (this is due to water content, a property described as 'hygrophanous') I'd say they are G. marginata. I couldn't rule out a different type of mushroom though as there are lots of orange log saprotrophs.

Thank you very much, I'll do my research and then decide :)

Perhaps a deadly Galerina marginata or a delicious Flammulina velutipes!

... personally I wouldn't risk it! It looks more like a Galerina to me anyway.