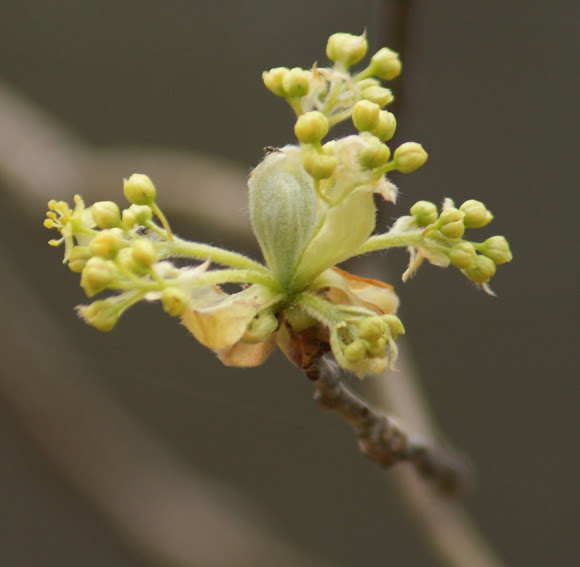 It is a medium-sized deciduous tree growing to 15–20m tall, with a trunk up to 60 cm diameter, and a crown with many slender branches. The bark on trunk of mature trees is thick, dark red-brown, and deeply furrowed. The branching is sympodial. The shoots are bright yellow green at first with mucilaginous bark, turning reddish brown, and in two or three years begin to show shallow fissures. The leaves are alternate, green to yellow-green, ovate or obovate, 10–16 cm long and 5–10 cm broad with a short, slender, slightly grooved petiole. They come in three different shapes, all of which can be on the same branch; three-lobed leaves, unlobed elliptical leaves, and two-lobed leaves; rarely, there can be more than three lobes. In fall, they turn to shades of yellow, tinged with red. The flowers are produced in loose, drooping, few-flowered racemes up to 5 cm long in early spring shortly before the leaves appear; they are yellow to greenish-yellow, with five or six tepals. It is usually dioecious, with male and female flowers on separate trees; male flowers have nine stamens, female flowers with six staminodes (aborted stamens) and a 2–3 mm style on a superior ovary. Pollination is by insects. The fruit is a dark blue-black drupe 1 cm long containing a single seed, borne on a red fleshy club-shaped pedicel 2 cm long; it is ripe in late summer, with the seeds dispersed by birds. The cotyledons are thick and fleshy.

Native to eastern North America, from southern Maine and southern Ontario west to Iowa, and south to central Florida and eastern Texas. It occurs throughout the eastern deciduous forest habitat type, at altitudes of sea level up to 1,500 m. This one was observed at the Silver Bluff Audubon Center in Jackson (Aiken County), SC.

It's also called White Sassafras, Red Sassafras, and Silky Sassafras. All parts of the plant are aromatic and spicy. The roots are thick and fleshy, and frequently produce root sprouts which can develop into new trees. Sassafras is often grown as an ornamental tree for its unusual leaves and aromatic scent. An essential oil, called sassafras oil, is distilled from the root bark or the fruit. It was used as a fragrance in perfumes and soaps, food (sassafras tea and candy flavoring) and for aromatherapy. The smell of sassafras oil is said to make an excellent repellent for mosquitoes and other insects. The root or root bark is used to make tea, although most commercial "sassafras teas" are now artificially flavored as a result of the FDA ban. A yellow dye is obtained from the wood. The shoots were used to make root beer, a traditional soft drink beverage carbonated with yeast, which owed its characteristic odor and flavor to the sassafras extract. Most commercial root beers have replaced the sassafras extract with methyl salicylate, the ester found in wintergreen and black birch (Betula lenta) bark. A safrole-free sassafras extract is now available for flavoring. The dried and ground leaves are known as filé powder. Filé is still used for thickening sauces and soups in Cajun, Creole, and other Louisiana cooking, notably in the dish filé gumbo. Safrole is now recognized by the United States Department of Agriculture as a potential carcinogen. Safrole, and sassafras not certified as safrole-free, have been banned in the United States as food additives or flavoring agents by the FDA since 1976 due to safrole's designation as a carcinogen. Safrole is commonly used by clandestine laboratories to synthesize various drugs such as MDA, MDMA and MDEA. For this reason, the sale of safrole and sassafras oil is monitored by the U.S. Drug Enforcement Administration.