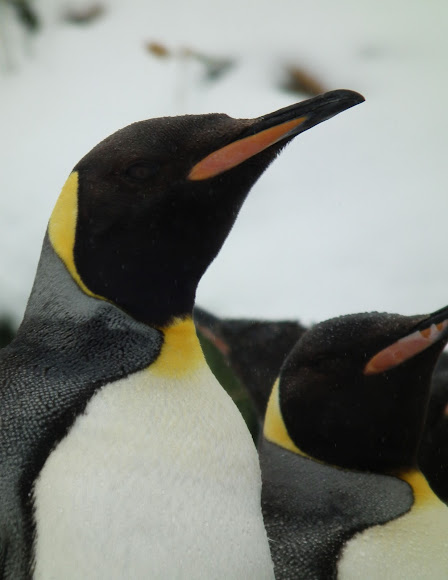 Very similar to the closely related emperor penguin, but the king is smaller, has a more northerly distribution and the yellow-orange throat patches are distinctly more "spoon shaped". They come in at just under a meter tall. They spend most of their time out at sea, but come on land to breed and form large colonies, on the scale of ~100,000 breeding pairs.

These penguins were in loose aggregates around King Edward Point and Grytviken, South Georgia as they were moulting.

The king penguins here were juvenile penguins going through their first moult to get their adult plumage through. Because of this, they were unable to go in the water, and hadn't fed in a while. We were told to make sure we kept our distance so they didn't get startled and use up energy they didn't need to. There were a lot of these small groups around Cumberland Bay.

Just wow! Thank you for sharing these

Great series! I love these guys :)

I am now catching up with your nice spottings Laura!

That must have been a sight to behold!

What an amazing series! Especially love the pic #5 with the iceberg on the background!

Wow, thanks for all the comments! It was amazing to see these guys :) Telse, I love your comment, now I can't stop picturing them with bright orange ear muffs on!

Beautiful series! What a wonderful experience