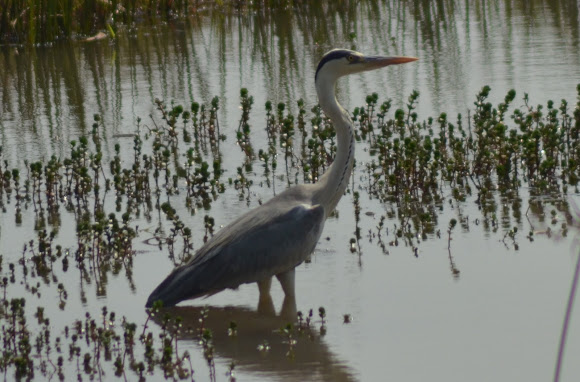 I captured this beautiful bird at Rakaskop in Belgaum

In the Netherlands, the Grey Heron has established itself over the past decades in great numbers in urban environments. In cities like Amsterdam, they are ever present and well adapted to modern city life. They hunt as usual but also visit street markets and snackbars. They are also present at the zoo during feeding times for penguins, pelicans and seals. Some individuals make use of people feeding them at their homes or recreational fishermen to share their catch. Similar behaviour on a smaller scale has been reported in Ireland

The Grey Heron (Ardea cinerea), is a wading bird of the heron family Ardeidae, native throughout temperate Europe and Asia and also parts of Africa. It is resident in the milder south and west, but many birds retreat in winter from the ice in colder regions. It has become common in summer even inside the Arctic circle along the Norwegian coast.