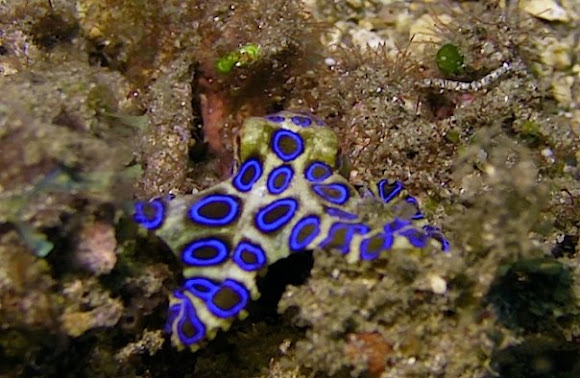 Th Blue-ringed Octopus is a small mollusc, body size of around 6-8cm. However, they are highly poisonous, supposedly one of the most poisonous animal on earth and there is no antidote for it. Their poison is actually from its saliva. This sequence of pictures show a pair of Blue-Ringed Octopus in the course of mating. The first picture was after the Male has done his job leaving the Female, all fluttered and flashing her bright blue rings :D

Mostly in the shallows among sandy and coral rubbles. They feed mostly on crustaceans, shrimps and crabs.

Thanks, @Mona.
Its the misconception of poisonous and deadly.
There is no doubt that Blue Ringed Octopus is poisonous but unless harassed and provoked directly, it is not 'deadly' to humans as it is highly unlikely the Octopus will intentionally 'bite' humans.

Gorgeous.. but deadly !! I've seen it once.. Nice spotting Albert :)

@Neil, this little guys can be elusive and I have met divers who really want to see them and traveled to many places to look for them without success.
However, there are certain places where they can be reliably spotted like Anilao & Malapascua in Philippines, Mabul in Malaysia and Mamado & Lembeh in Indonesia and some places in Australia. Hope you get to see them eventually :)

What a great spotting. I'm kind of envious! I keep my eyes open for these every time I'm at ocean rock pools, but after a lifetime of searching, I still haven't found one. Other octopus, yes, but blue rings?!! Hard to give an exact ID because they're all so small, but here's a really good link with awesome info and video - http://marinebio.org/species.asp?id=403

So interesting, beautiful and informative.