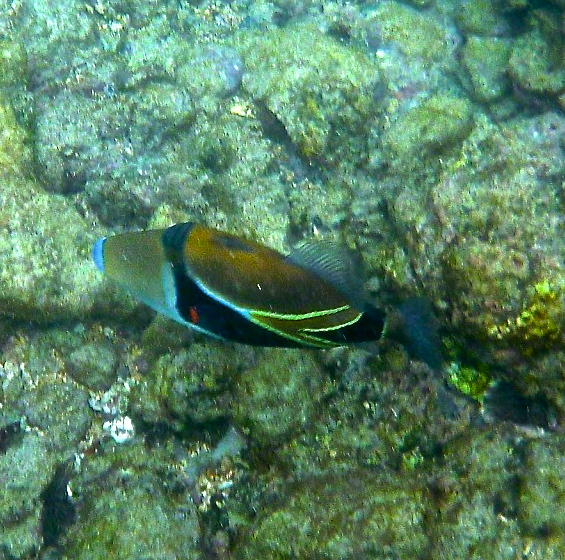 The reef, rectangular, or wedge-tail triggerfish, also known by its Hawaiian name, humuhumunukunukuāpuaʻa (pronounced [ˈhumuˈhumuˈnukuˈnukuˈwaːpuˈwɐʔə]), also spelled Humuhumunukunukuapua'a or just humuhumu for short; meaning "triggerfish with a snout like a pig." is one of several species of triggerfish. Classified as Rhinecanthus rectangulus, it is endemic to the salt water coasts of various central and south Pacific Ocean islands. It is often asserted that the Hawaiian name is one of the longest words in the Hawaiian language and that "the name is longer than the fish." (wikipedia)

The reef triggerfish is distributed throughout the Indo-Pacific region, and it is especially prominent in the coral reefs of the Hawaiian Islands.

Saw this fish while snorkeling in Maui