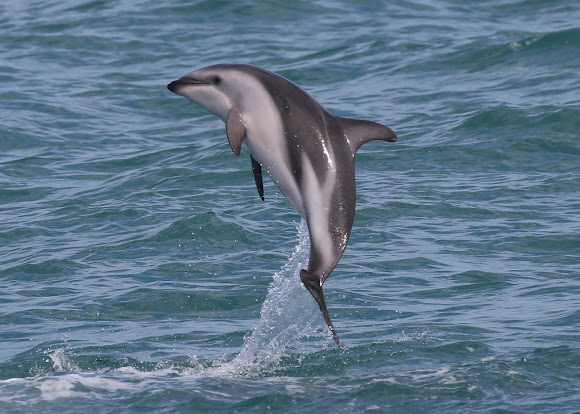 Medium sized dolphin (adults 1.8-2.1m long and up to 115kg). Black back and flanks with broad white striping along sides. Ventral surfaces white with white extending up over the shoulders. Calves are born at 90-60cm long averaging around 5kg. This dolphin has only a small beak.

Reasonably common from Hawkes Bay down into southern NZ waters. Often seen off the coast in groups from a dozen to large pods of up to 1000, where they hunt for fish, squid and bottom dwelling prey. This large pod was observed south of Kaikoura in New Zealand South Island about half a mile off the coast. This is a Southern Hemisphere species living in temperate to sub antarctic waters generally living in waters less than 2000m deep.

These dolphins are highly active and can be extremely acrobatic. Often seen leaping and somersaulting out of the water for hours at a time. No one seems exactly sure why they do this, perhaps for display or feeding communication, or maybe just because they can. Either way it is a delight to behold. They often feed and interact with other sea mammals. Ref: NZDOC Dusky Dolphin

Thank you flowntheloop. It was a lot of fun photographing these guys!

Thank you so much Liana. Time is an issue at the moment but I look forward to posting some more soon. I appreciate the support and enthusiasm that you and others here have shown for my images.

Thank you Vipul and Felix. It was a lot of fun taking these images.

Sure am looking forward to seeing more of your spottings Rob! It is always a treat :)

Thank you Liana, and Polilla for all your support over the last year. Have a few treats lined up for this year just need the time to post some!

Thank you Daniele and PN for the second place. I am so happy you all enjoyed the series.

Congratulations on another achievement Robert! This great shot came second in our 2016 Best Photo mission in the Mammals category!

Thanks Mark, it was a lot of fun to watch these guys.

Thank you guys for your kind comments. Much appreciated.

Congrats to you... Lovely spotting....

Congrats again on the SOTD :-)

Thank you armadeus.4 and Chris. They certainly give the impression that they are enjoying themselves and seem to keep it up for hours!

Congrats. It's so beautiful.