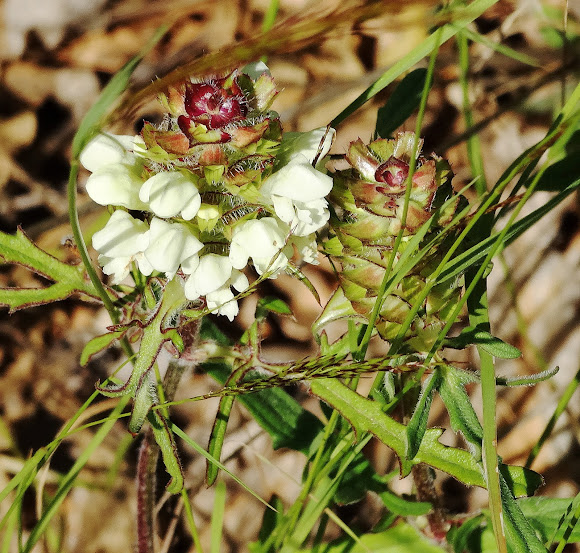 Prunella laciniata, commonly called cutleaf self-heal, is a perennial herb in the Lamiaceae, or mint, family. It is native to Europe and thrives in U.S. Department of Agriculture plant hardiness zones 6 through 9, where it is evergreen. Like the more familiar Prunella vulgaris, Prunella laciniata is called self-heal because of its antiseptic properties. Prunella laciniata has the characteristic square stems of the mint family, covered with fine hairs. Its leaves are long, narrow and divided, hence the botanical description “laciniata,” which means “torn” or “cut.” It reaches about 1 foot tall and 2 feet wide and spreads over wide areas by means of runners and by seed. It can be used as a ground cover. Cutleaf self-heal blooms from June through September with small, hooded flowers of pink, purple or white held on upright stems. The flowerheads resemble those of Spanish lavender (Lavandula stoechas), although self-heal’s stems are shorter. Self-heal received its name from its wound-healing properties. John Gerard, a 16th-century herbalist, claimed there was “not a better wound herb in the world.” In the 17th century, botanist Nicholas Culpepper wrote that the plant was called self-heal because “when you are hurt, you may heal yourself.” During the 1800s and until the mid-1900s self-heal was used to treat heart disease, sore throats and bleeding. It is still an herbal remedy used externally for treating sores, burns and other minor skin injuries.