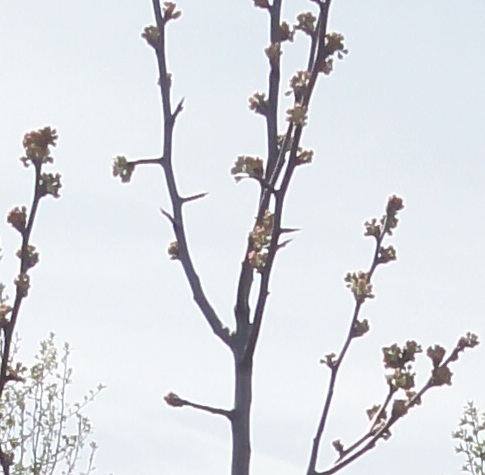 While various cultivars of the Callery pear are commonly planted for their ornamental value, their prolifically produced fruits are taken by birds, which disperse the seeds in their droppings. The various cultivars are generally themselves self-incompatible, unable to produce fertile seeds when self-pollinated, or cross-pollinated with another tree of the same cultivar. However, if different cultivars of Callery pears are grown in proximity (within insect-pollination distance, about 300 ft or 100 m[2]), they often produce fertile seeds that can sprout and establish wherever they are dispersed. The resulting wild individuals, of various genetic backgrounds, can in turn interbreed, producing more viable seed and furthering expansion and dispersal of the wild stand of the species. These plants often differ from the selected cultivars in their irregular crown shape and (sometimes) presence of thorns.

Open & previously cleared/disturbed lot between industrial complex and uncultivated wetlands/drainage area. Naturalized Callery Pears often form dense thickets and these are often thorny since even thornless cultivars apparently retain genes for thorniness that may be expressed in their mixed ancestry progeny

This is small & emerging thicket of naturalized callery pears (you can see the likely parent trees peeking overthe hill in the background; those trees are part of an intentional landscape planting.) You can clearly see large thorns on this wild specimen - a trait you do not typically see in any of the ornamental cultivars.