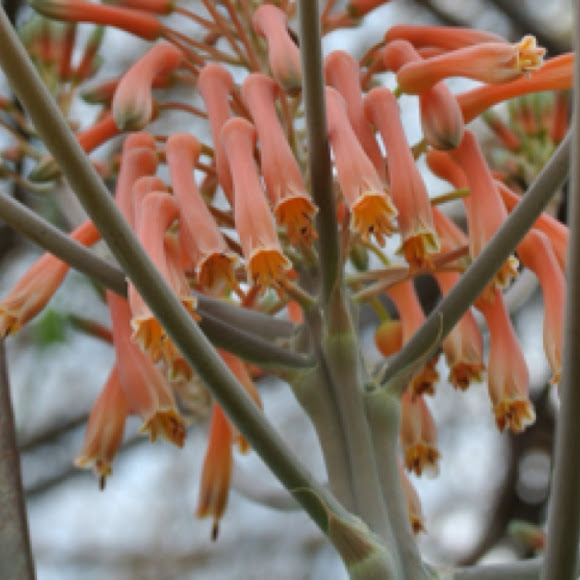 Aloe Vera is a species of Aloe, native to northern Africa. It is a stemless or very short-stemmed succulent plant growing to 80-100 cm tall, spreading by offsets and root sprouts. The leaves are lanceolate, thick and fleshy, green to grey-green, with a serrated margin. The flowers are produced on a spike up to 90 cm tall, each flower pendulous, with a yellow tubular corolla 2 to 3 cm long.

Potted plant which overwintered in a greenhouse.

Aloe Vera has been found described in writings in many different cultures and as far back as the Greek, Egyptians, and Roman eras. References have also been found in writings from the Indian and Chinese early cultures. Ancient records show that the benefits of Aloe Vera have been known for centuries, with its therapeutic advantages and healing properties surviving for over 4000 years. The earliest record of Aloe Vera is on a Sumerian tablet dating from 2100 BC. Its antiquity was first discovered in 1862 in an Egyptian papyrus dated 1550 BC. Egyptian Queens associated its use with their physical beauty. It was used to great effect by Greek and Roman physicians. Researchers have found that both the ancient Chinese and Indian used Aloe Vera. Aloes are referred to in the Bible, and legend suggests that Alexander the Great conquered the island of Socotra in the Indian Ocean to secure supplies of Aloes to treat the battle wounds of his soldiers.