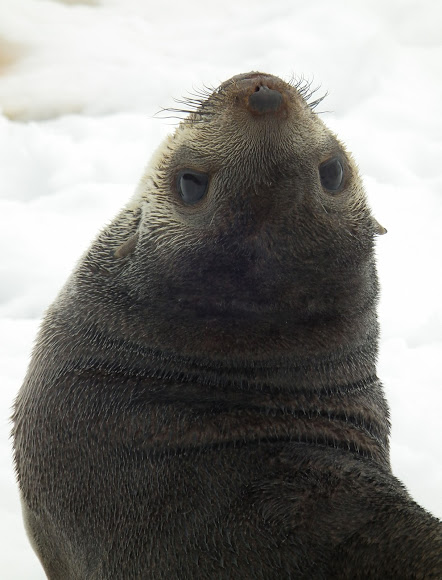 Antarctic fur seals are not true seals, but sea lions. They are fairly large, and surprisingly fast on land (I had to flee from some rather aggressive youngsters!), though the males are significantly bigger than the females, with thick necks and shoulders. Compared to other fur seals, they have broad and short snouts. When we arrived at South Georgia, the females had already had their pups, and the males had returned to the open ocean.

These fur seals stayed mainly on the beaches, sometimes lying in the tussock grass. The females leave for the open ocean to feed, often for several days, leaving their babies on the beaches. They seemed happy enough to entertain themselves, though!

There were many seal pups at King Edward Point and Grytviken. They were extremely playful, and super cute. The large, adult males had left, but there were still fully grown females and "teenage" males around. Most were pretty placid, but there were some that were rather aggressive and sometimes chased us! I kept reminding myself that should it come to running, I had the evolutionary advantage... but it didn't make their teeth look any less sharp.

So cuuute!!!! Great series, I particularly like the first photo.

Thank you all for your comments, I'm so glad people are as charmed with these wonderful animals as I was :)

What a cutie... Lovely series.

The last photo is simply adorable.

Congratulations on National Geographic Spotting of the Week!!
It is awesome and I am very happy that you received such honor!
I look forward to see more wonderful spotting from you :-)

Congrats1 you deserve it.

Congratulations on the SOTW!

Thanks so much everyone!!

Congrats Laura! They are so adorable!

Congratulation, this is an adorable spotting, well deserved indeed :)

Our National Geographic Spotting of the Week: An Antarctic fur seal plays on the beach.