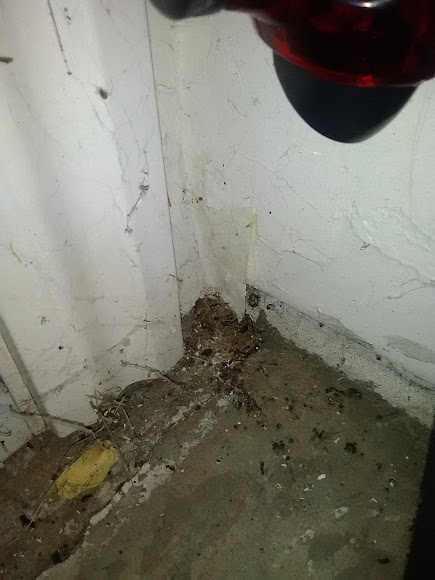 The adult female triangulate cobweb spider is 3 to 6 mm long (1/8 to 1/4 inch), with a brownish-orange cephalothorax and spindly, yellowish legs, and tiny hairs. The round, bulbous abdomen is creamy in color, with parallel purply-brown zigzag lines running front to back. This distinctive pattern sets it apart from other theridiids in its area. The triangulate cobweb spider is known to prey on many other types of arthropods, including ants (including fire ants), other spiders, pillbugs, and ticks. It preys on several other spiders believed to be harmful to humans, including the hobo spider and the brown recluse. The egg sac of the triangulated cobweb spider is made from loosely woven silk, and is about the same size as the spider itself. Each egg sac contains approximately 30 eggs. Cobweb spiders typically live on windows or in dirt areas. They eat for a margin of their day and spend hours developing their web; it does not break if it is woven well. Below or in its web, there may be many dead insects, ranging from stinkbugs to other spiders, and even wasps.

In common with other members of the Theridiidae family, S. triangulosa constructs a cobweb, i.e. an irregular tangle of sticky silken fibers. As with other web-weavers, these spiders have very poor eyesight and depend mostly on vibrations reaching them through their webs to orient themselves to prey or warn them of larger animals that could injure or kill them. They are not aggressive. Other, larger members of the Steatoda genus do have medically significant bites, but there are no recorded bites or envenomations by this spider. S. triangulosa is a cosmopolitan species, and is found in many parts of the world, including all three coasts in North America, in southern Russia and New Zealand, and in Europe. The spider is believed to be native to Eurasia. This species is primarily a house spider, and builds webs in dark corners of buildings and other man-made structures.

This little guy lives in my garage, and makes his home behind our fishing poles.