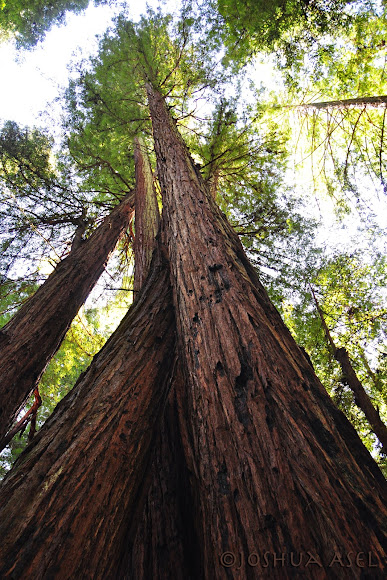 The native habitat of Sequoia sempervirens trees is only in the Northern California coastal forests ecoregion, on the Northern California coast and several miles into OregonThe entire subfamily is endangered. Sequoiadendron giganteum and Sequoia sempervirens are Vulnerable species, and Metasequoia glyptostroboides is a critically endangered species on the IUCN Red List.

The two California redwood species, since the early 19th century, and the Chinese redwood species since 1948, have been cultivated horticulturally far beyond their native habitats. They are found in botanical gardens, public parks, and private landscapes in many similar climates worldwide. Plantings outside their native ranges particularly are found in California, the coastal Northwestern and Eastern United States, areas of China, Germany, and the United Kingdom. They are also used in educational projects recreating the look of the megaflora of the Pleistocene landscape.

Armstrong Woods, Geurnville, CA. Some of the worlds last remaining giants live here. Geustimating at least 80% of these gigantic Redwood Trees were more than 200ft tall. And these guys, easily being at least that tall, criss-crossed into each other and have now become one. Also, photographing trees this massive, even with a wide angle, is hard but fun!