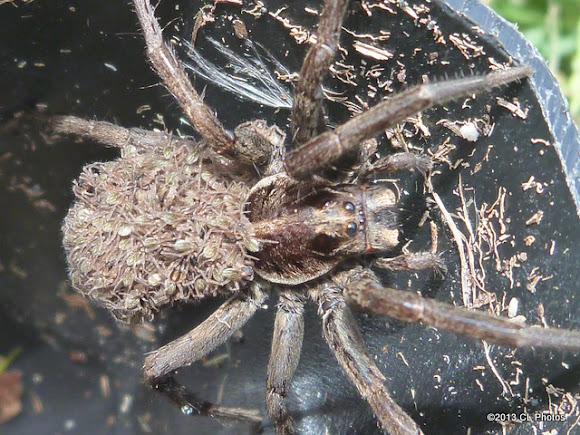 The Wolf Spider is found throughout Australia, living in small burrows or under leaves, bark, or other debris. They are hardy spiders, and live under almost any conditions. Wolf Spiders can be found in suburban gardens to desolate inland regions. They are able to dig burrows up to 30 cms deep by using their jaws. Some species create a trap door on their burrow, and others are known to cover the entrance with a pebble (which also prevents flooding of the burrow). There are many species of the Wolf Spider. The two most common species to be found in Australia are Lycosa godeffroyi and Lycosa leuckartii. These spiders obtained the label 'wolf' as they are known to stalk their prey such as a wild canine would. They have eight eyes in a 2-2-4 formation (see photo), two at the back, two at the centre and four in front. The Wolf Spider feeds on other insects such as crickets and bugs. It eats lizards and it is also known to take down larger prey such as mice, small birds and even cane toads.

The female wolf spider weaves a circular mat of fine silk onto which she deposits a hundred or more eggs. She then weaves silk around the eggs, draws up the sides of the mat and sews it into a silken ball. The size of this silken ball is often about the same as the spider itself. Using strong silken threads, she then attaches the egg case to the under surface of her abdomen and carries it with her. She incubates the eggs during the day by facing the egg case towards the sun and slowly turning it. When the spiderlings finally hatch, they crawl up onto the mother’s abdomen, often covering her several layers deep. Her maternal care extends only to providing the spiderlings with transport and protection from predators. The spiderlings do not share any of the prey that the mother catches, and if they fall off they are not rescued. Still, it’s a better start to life than most other spiderlings receive. The wolf spider is not alone in the maternal care department. Scorpions also carry their young on their back, and female huntsmen spiders will also protect their spiderlings.

Apart from their scary appearance, Wolf Spiders are not aggressive arachnids. If disturbed however, the wolf spider may defend itself by biting. There have been no reported deaths from the Wolf Spider, and no antivenin is required after a bite. However, if a human is bitten by a Wolf Spider, medical advice should be sought. Wolf Spiders can cause necrosis (rotting of the skin). The venom of a Wolf Spider is powerful enough to kill a fully grown dog within a few hours.

Thanks J, Gilma and Lori...