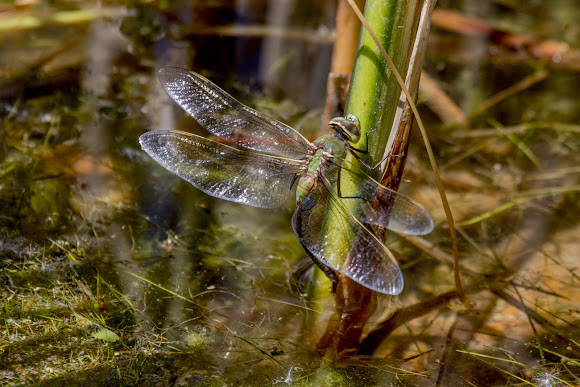 Both male and female green darners have an unusual blue and black "bulls-eye" marking on the frons (or forehead, in laymen's terms), just in front of their large, compound eyes. The thorax is green in both sexes. The long abdomen is marked by a dark line, which runs down the center of the dorsal surface. In immature common green darners of either sex, the abdomen appears red or purple. Mature males bear a bright blue abdomen, but in the early morning or when temperatures are cool, it may turn purple. In reproductive females, the abdomen is green, matching the thorax. Older individuals may have an amber tint to their wings.

live near freshwater habitats, including ponds, lakes, slow-moving streams, and vernal pools. The green darner has an extensive range in North America, from Alaska and southern Canada all the way south to Central America. Anax junius is also found on islands within this geographic range, including Bermuda, the Bahamas, and the West Indies.