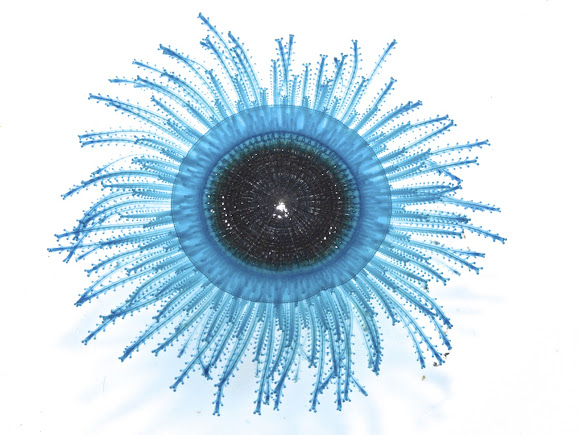 Porpita porpita, commonly known as the blue button, is a marine organism consisting of a colony of hydroids found in tropical and sub-tropical waters of the Pacific, Atlantic, and Indian oceans. Although it is superficially similar to a jellyfish, each apparent individual is actually a colony of hydrozoan polyps. The blue button is a Chondrophore, which is a group of cnidarians that also includes Velella and Porpema. The chondrophores are similar to the better-known siphonophores, which includes the Portuguese Man o' War. The blue button lives on the surface of the sea and consists of two main parts: the float and the hydroid colony. The hard golden-brown float is round, almost flat, and about one inch wide. The hydroid colony, which can range from bright blue turquoise to yellow, resembles tentacles like those of the jellyfish. Each strand has numerous branchlets, each of which ends in knobs of stinging cells called nematocysts. The blue button sting is not powerful but may cause irritation to human skin. The blue button itself is a passive drifter, and is part of the neustonic food web. It is preyed on by the sea slug Glaucus atlanticus (sea swallow or blue glaucus) and violet sea-snails of the genus Janthina. It competes with other drifters for food and mainly feeds on copepods and crustacean larvae. The blue button has a single mouth located beneath the float, which is used for both the intake of prey and the expulsion of wastes.

Thanks, @Laura for your kind words and liking this Spotting :)

Wow!! Hydrozoans are cool, and this specimen is gorgeous! Really lovely cataloging of this organism, I especially love that last one.

Thanks, @Ashley for another nomination :)

Thanks, @Antonio for your kind words.
I wish I could share such interesting Spottings every day ... ha ha, but good enough that there are PN Rangers/Members who find some of my Spottings interesting :)

Wow Albert ,like i said before,you surprise us almost every day :-) just astonishing ,congrats and thanks for sharing

Incedible spotting! Thanks for sharing, Albert!

Thanks, @Leanne and @Francisco
This is the first time I see it :)