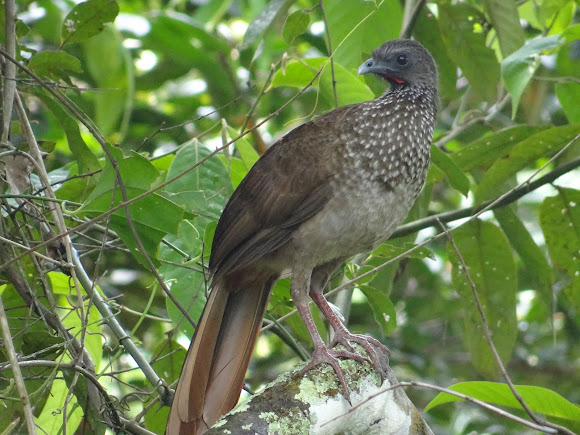 The Speckled Chachalaca is a member of the family Crassidae, a close relative to Curassows. This turkey-like bird is mostly arboreal and it usually travels in pairs or trios. Their social nature and arboreal behaviour are great indicators for identifying the species, since other Chachalacas look very similar. They range throghout most of the Amazonian Rainforest and other patches of tropical areas around South America. In recent years, it has spread widely due to its tolerance and resistance to disturbed habitats and fragmentation, along with their relatively small size. Their most noteworthy feature is the flap of skin beneath their beaks.

Thank you Ashley! I'll do my best!

Oh, I didn't know that! Thanks!

Since I don't know that area this might help you.
Similar Species

but doesn't the Colombia one have barring? the one I suggested is speckeled

Thank you Ashley and Jellis, I was able to find the specific species of this bird thanks to you.

One of the species of Chachalacas, just not sure which one!