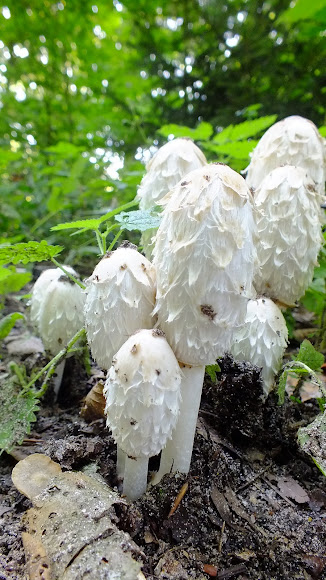 Initially egg-shaped and opening into a long bell, the shaggy caps of Coprinus comatus are at first pure white with a pale brown area at the top that breaks up into large recurved scales. In dry weather the whole of the cap breaks into pale flaking scales that stand out from the cap surface. Rain flattens the scales, as has happened in the case of the group shown here. Typically 5 to 10cm but occasionally 15cm tall and up to 6cm in diameter, the white caps of the Shaggy Inkcap darken and deliquesce from the lower edge, eventually leaving just the stipe with a very small black disc perched on top. The adnexed to free gills of Coprinus comatus are crowded and initially white. They soon turn pink and then black before deliquescing from the outside edge. The stem of the shaggy inkcap is parallel sided, 10 to 15mm diameter and up to 30cm tall, white, quite brittle, and hollow. The stem ring becomes stained with black spores. It soon becomes movable and often falls down to the base of the stem.

Coprinus comatus is saprobic and can be found on grass verges and lawns, at the edges of footpaths, and in open woodland. Shaggy Inkcaps often appear in small groups and occasionally in long, wandering lines or fairy rings.

Spotted aside a hikingtrail near Averlo, Holland. (sources: see reference)