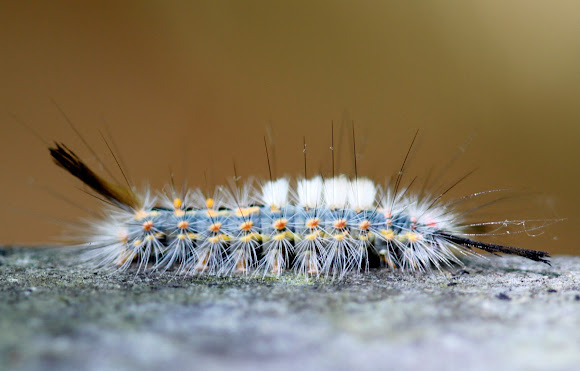 From Wikipedia, the free encyclopedia Jump to: navigation, search Lymantriidae Caterpillar of the pale tussock moth, Calliteara pudibunda Coin is c.2 cm across. Scientific classification Kingdom: Animalia Phylum: Arthropoda Class: Insecta Order: Lepidoptera Suborder: Ditrysia (unranked): Macrolepidoptera Superfamily: Noctuoidea Family: Lymantriidae Hampson, 1893 Subfamily: Lymantriinae Tribes Lymantriini Orgyiini Nygmiini Leucomini Arctornithini Diversity About 350 genera, 2,500-2,700+ species Illustration of Tussock Moth (1917). Lymantriidae is a family of moths. Many of its component species are referred to as "Tussock moths" of one sort or another. The caterpillar, or larval, stage of these species often has a distinctive appearance of alternating bristles and haired projections. Like other families of moths, many Tussock Moth caterpillars have urticating hairs (often hidden among longer, softer hairs) which can cause painful reactions if they come into contact with skin. The family Lymantriidae includes about 350 known genera and over 2,500 known species found all over the world, in every continent except Antarctica. They are particularly concentrated in sub-Saharan Africa, India, Southeast Asia and South America; one estimate lists 258 species in Madagascar alone (Schaefer, 1989). Apart from oceanic islands, notable places that do not host Lymantriids include New Zealand, the Antilles, and New Caledonia (Schaefer, 1989

Adult moths of this family do not feed. They usually have muted colours (browns and greys), although some are white, and tend to be very hairy. Some females are flightless, and some have reduced wings. Usually the females have a large tuft at the end of the abdomen. The males, at least, have tympanal organs (Scoble, 1995). They are mostly nocturnal, but Schaefer (1989) lists 20 confirmed diurnal species and 20 more likely diurnal species (based on reduced eye size). The larvae are also hairy, often with hairs packed in tufts, and in many species the hairs break off very easily and are extremely irritating to the skin (especially members of the genus Euproctis; Schaefer, 1989). This highly effective defence serves the moth throughout its life cycle as the hairs are incorporated into the cocoon, from where they are collected and stored by the emerging adult female at the tip of the abdomen and used to camouflage and protect the eggs as they are laid. In others, the eggs are covered by a froth that soon hardens, or are camouflaged by material the female collects and sticks to them (Schaefer, 1989). In the larvae of some species, hairs are gathered in dense tufts along the back and this gives them the common name of tussocks or tussock moths. Lymantria means "defiler", and several species are important defoliators of forest trees, including the gypsy moth Lymantria dispar, the douglas-fir tussock moth Orgyia pseudotsugata, and the Nun Moth Lymantria monacha

Erebidae, Lymantriinae, Orgyia sp. and most probably Orgyia detrita, due to the typical orange spots, which are not shown in the similar Orgyia leucostigma.

One of the Tussock Moth caterpillars perhaps. http://www.ispot.org.uk/node/292257