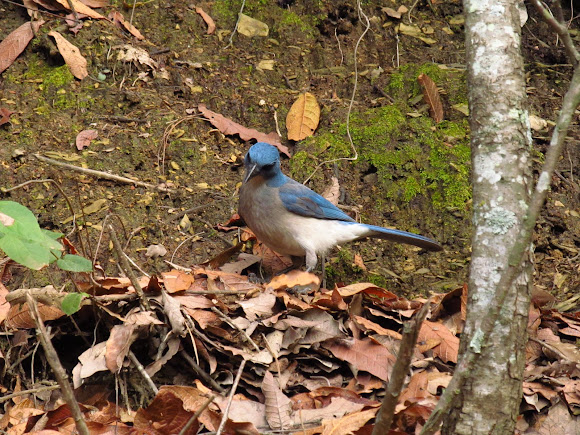 The Mexican Jay is a medium-large (~120 g) passerine similar in size to most other jays, with a blue head, blue-gray mantle, blue wings and tail, and pale gray breast and underparts. The sexes are morphologically similar, and juveniles differ only in having less blue coloration and, in some populations, a pink/pale (instead of black) bill that progressively becomes more black with age (Brown and Horvath 1989). Some field guides misreport this color as yellow because the pale bill becomes yellow in museum study skins. The iris is brown and legs are black. It is most readily distinguished from the similar Western Scrub-Jay by the plain (unstreaked) throat and breast, and the mantle contrasting less with the head and wings. Its range somewhat overlaps with the Western Scrub-Jays, but, where they co-occur, the two species seem to show ecological and morphological character displacement (Curry et al. 2002).

On ground level. Frequently found in groups with one or two more individuals. Found at MSL ranging from 700 to 1500 meters.