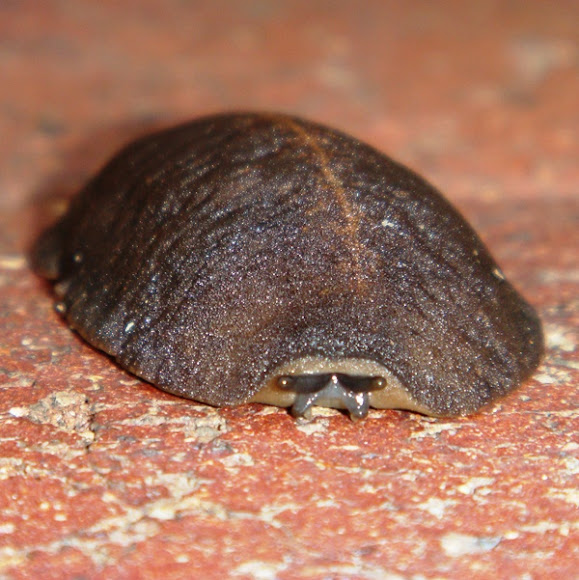 This is the biggest and strangest slug I've ever seen - dark brown with an orange stripe down its back and a tiny head that it could retract like a turtle's. It was on the path outside my workplace. I took a pic of it next to a 50c coin to give you an idea of the size (see shot 5). If it had been in the garden I never would have seen it, and even on the path I thought it was a leaf at first - then I realised it was too solid so I got down close and realised what it was!! According to my book 'Wildlife of Greater Brisbane: A Queensland Museum Wild Guide' this slug has been introduced to Australia from southern Asia and is present in WA, NT and Queensland.

Me neither Martin! It took me ages to find an ID because I was looking for 'slugs of Queensland' on the net - it doesn't come up in any sort of search like that because it's introduced. I didn't even THINK to look for introduced slugs. It wasn't until I went to my trusty hard copy of 'Wildlife of Greater Brisbane' that I found it.

That's fascinating Shanna. I was not aware of this creature even existing.

Thanks Lenny. It was just on dusk.

Nice shots Shanna
This is quite common here in Thailand.
You were lucky to see in the day,They are usually nocturnal.

It was the first time for me too, Lauren!

This is amazing! Great find. Never saw this before.

Thanks Leanne and Gerardo! I was very excited when I saw it. I was actually running late getting home from work, but I spent quite some time photographing it and then rescuing it and putting it way back in the garden so no one trod on it.

Wow! It's huge Shanna! What a great find, I'll bet you couldn't believe your eyes.