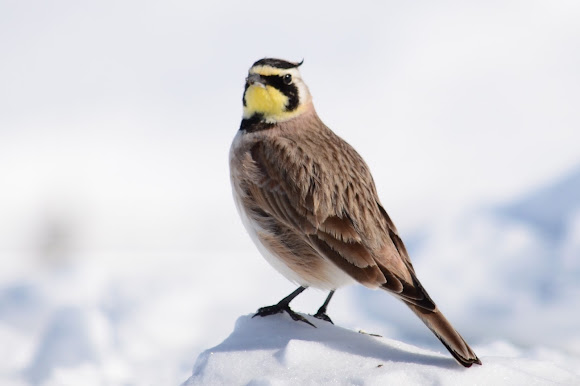 A Horned Lark on snow

I found this fellow along a tarred road edged with gravel, within one mile of: farm fields, pastures, woods and CREP lands.

I see them pecking in the gravel along the road but am not sure what they could be finding to eat other than gravel, snow or melting ice as everything is covered under 2-3 feet of snow except the roadways which are plowed. Worried about their food supply, I recently started sprinkling whole kernel corn and sunflowers seeds in areas where I've seen them. I stayed long enough to see a few return, pick up the corn and run up on a snowbank to eat it or at least peck at it. Returning the next day, most of the seed I put out was gone but there were also signs of Pheasants, Turkey and something resembling raccoon tracks so I'm not sure exactly what or who was dining on the seed I left. In years past I thought these small, sparrow-looking birds along the roadways were just that, sparrows until I zoomed in on a few this year. To my surprise 6 out of 10 were Common Redpolls and 4 out of 10 were Horned Larks...not a single Sparrow in the bunch.

Thank you so much Glen Marks, Ali Hemati Pour and JerryMorrow!!