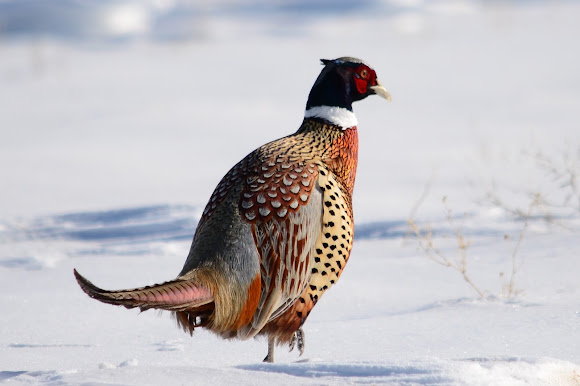 I'd seen this male Ring-necked Pheasant last fall but had forgotten about him. I had worried about the Horn Larks I'd been seeing foraging along dirt roads because of the heavy snow cover (2-3 feet deep) as well as blowing and drifting snow and windchill (extremely cold) temperatures so had scattered some whole kernel corn along the ditch hoping they could eat it if they weren't finding enough food. I came back the next day and saw that most of the corn I'd put down was gone so scattered some black-oil sunflower seeds where I'd put the corn the previous day. Further down the road we came across this Pheasant, on one of the huge snow banks created by the plows, pecking at the gravel-speckled snow. He would pause frequently and raise his feet (one at a time) up under his belly to warm them, I believe. I had a little corn left over from feeding the Turkey and Deer so put out a little more for him in case he was having trouble finding food like the Horned larks I was so worried about. I was told by two different Pheasant groups that we don't have Pheasants up here and that if I was seeing a few here and there they were probably being raised and released by someone nearby. That could be true however, I've been feeding five females over in Otter Tail, one in the park and now this one and have frequently seen them running alongside the road near the golf course in Otter Tail as well. Whether wild or raised and released I've seen seven within seven miles all winter this year and somehow they're managing to survive our heavy snowfall and cold temperatures. I find the iridescent males to be extremely beautiful and somewhat more tolerable to humans than the somewhat drab females who run or fly away with my extremely slow approach.

Awesome series! Such a beautiful bird! Thanks for feeding him and sharing your pictures.