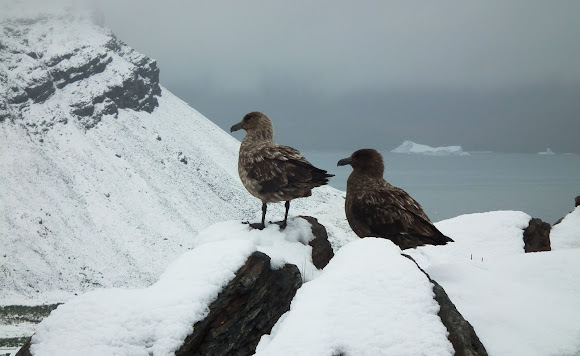 Taxonomy is a little uncertain, as some people like to separate this species further, but I am just going with my ID book on this one. Very general skua appearance, brown plumage all over with white flecks, and white stripes on the wings, looks very similar to the Great Skua found in the northern hemisphere. Has the typical barrel chest and hooked bill. It is the heaviest skua species, and rivals many large gulls for the largest in the shorebird order (Charadriiformes).

Breeds in subantarctic and Antarctic regions, moves a little further north when not breeding. Never found these birds at sea, and only came across them in noticeable numbers when we were at South Georgia. These two were on top of a mountain by Gull Lake near Grytviken, South Georgia.

I climbed a small mountain outside of Grytviken to get to Gull Lake at the top, and found these two just standing there. They never moved, just kept staring at me as I took a few snaps. It was a little bit eerie! As you can see, view was amazing, though. Unlike the North Sea and North Atlantic, we never found any skuas following our ship.