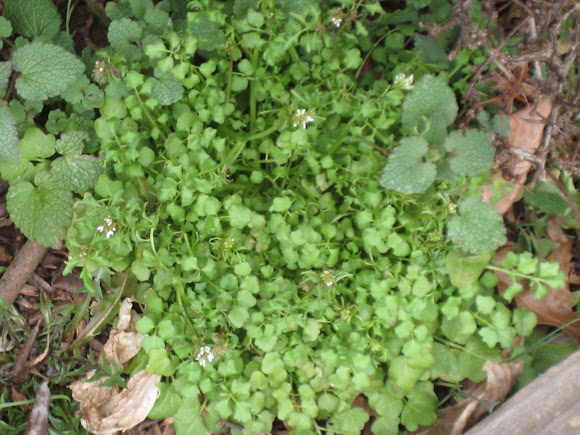 Hairy Bittercress, Cardamine hirsuta, is an ephemeral plant native to Europe and Asia, but also present in North America. The plant is a member of the mustard family (Brassicaceae), and is edible[1] as a bitter herb. It flowers from quite early in the Spring until the Autumn. The small white flowers are borne in a corymb on wiry green stems, soon followed by the seeds and often continuing to flower as the first seeds ripen. The seed are borne in siliquae which, as with many Brassica species, will often burst explosively when touched, sending the seeds flying far from the parent plant. Seeds germinate in the Autumn, and the tiny plants are green throughout the winter months. This plant grows best in damp, recently disturbed soil. These conditions are prevalent in nursery or garden centre plants, and Hairy Bittercress seeds may be introduced with those plants. Once established, particularly in lawn areas, it is difficult to eradicate. The tiny flowers are attractive to a few early butterflies, including (in the US) Spring Azure (Celastrina ladon) and Falcate Orange-tip (Anthocharis midea) Other common or country names include lamb's cress, land cress, hoary bitter cress, spring cress, flick weed, and shot weed (or lambscress, landcress, hoary bittercress, springcress, flickweed, and shotweed). As Old English stune, the plant is cited as one of the herbs invoked in the pagan Anglo-Saxon Nine Herbs Charm, recorded in the 10th century. from wikipedia

thanks to ilias.semmouri for the id