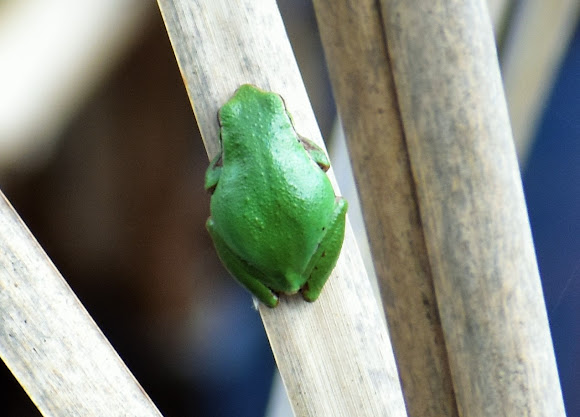 These frogs have the ability to change color from brown to green. Previously, adults were thought to occur in two different fixed colors. Now, some of them have been found to be able to change between the two. They can also change from lighter to darker, shift from patterned markings to pure colors and vice versa, and even display combinations of colors, brown/green being the most frequent. These color-changing morphs are triggered not by color change in their environments, but a change in background brightness. This type of environmental change would be caused by seasonal fluctuation. A full change in the dorsal coloration of a color morph can take from weeks to months, but initial changes can occur in just a few hours. This has been shown to be a very useful cryptic survival feature for these frogs.(wikipedia)

Spotted resting on tall reeds at a the edge of a wetland - pond.

Research was done on Pacific tree frogs to discover if they have homing instincts and what was their main source for knowing where their home was. To find the answer, these frogs were marked and moved 300 yards away from their pond. Several days later, the researchers did a recapture on the original pond in which 66.3% of the frogs were recaptured, indicating there was some source of homing instinct. This was made apparent again when 24 frogs were placed into a larger pond, and 20 of those frogs returned to their original pond. The frogs' movement patterns and olfactory, auditory, and kinesthetic senses could be explanations for the homing, but not a single factor was able to explain the results, indicating that these frogs might be using all or a combination of these factors for homing.