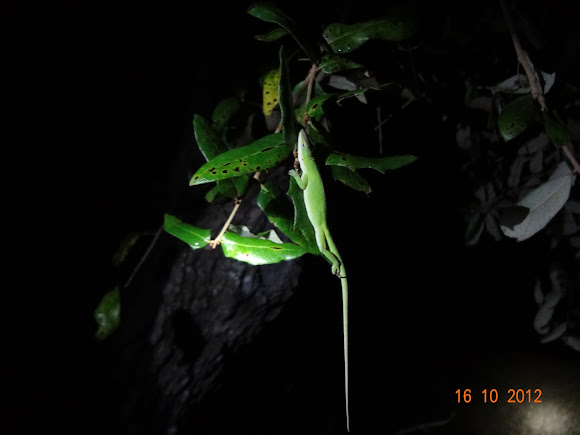 Green anoles are bright green, very commonly observed, and sleep in trees (hanging on top of leaves or at the end of small twigs). Male green anoles have a pink dewlap (the fold of skin on their necks) and they extend it to flash the color as an indication of territory and/or mating behavior. They also do push-ups for the same reasons. A. carolinensis populations are fairly wide-spread across the SE US, with a few disjunct populations in West TX (which are believed to be introduced populations).

These arboreal lizards tend to prefer habitat with available water and plenty of brush and trees. They are commonly found around houses that have bushes in the yards, as well as in "wild" areas. This one was sleeping on top of an oak leaf at Aransas NWR. They commonly sleep on top of leaves or at the end of narrow twigs, usually above raccoon height.

Everybody posts their anole pics, I figured I'd post mine too although in a different light.