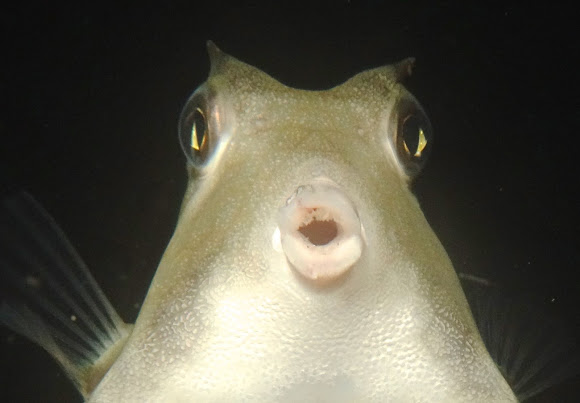 The humpback turretfish (Tetrosomus gibbosus), also known as the helmet cowfish, camel cowfish and thornbacked boxfish, is a species of boxfish native to the Indo-West Pacific, but also established in the Mediterranean Sea via Lessepsian migration. It is mainly found at depths of 37–110 m (121–361 ft) on slopes or over muddy bottoms, but can sometimes be seen near shallow seagrass beds. It reaches up to 30 cm (12 in) in length, but is more common at around 20 cm (8 in). Like other boxfish, its flesh is poisonous. It feeds on a wide variety of invertebrates and algae

The Humpback Turretfish is usually found in deep offshore waters over coastal slopes and sheltered muddy and sandy substrates. It is also occasionally found near shallow algae and seagrass beds with silty rubble substrates, and areas of part-destroyed coral reefs, and rocky outcrops. This species has a depth range of 37–110 m, and feeds on macroalgae and invertebrates, including worms, crustaceans, molluscs, and sponges.