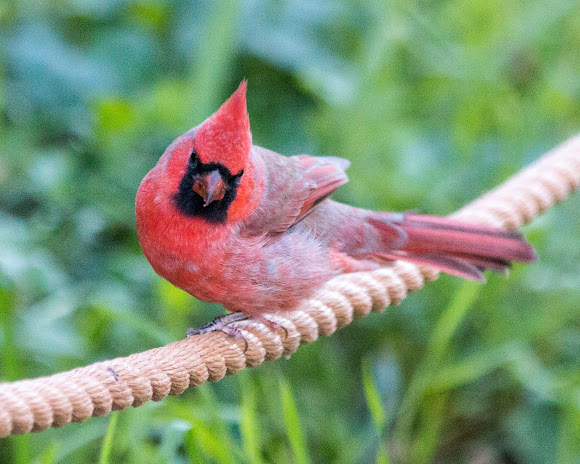 Although this site is world renown for migratory birds (see below), this spotting is a resident. Striking and familiar backyard bird throughout most of eastern North America; also occurs in the southwestern U.S. and fairly extensively in Mexico. Crest, large red bill, and long tail render this species distinctive even with a poor view. Male is entirely red with a black face. Female is brownish overall with redder wings and tail. Usually seen in pairs or small groups near dense cover, especially thickets near forest edges. Frequently visits bird feeders. Listen for high-pitched metallic chips and series of loud, sweet whistles.

Located in Lincoln Park, Montrose Point Bird Sanctuary attracts tens of thousands of migratory birds to stop for rest, food, and shelter each spring and fall. Within the natural area is “The Magic Hedge”, a 150-yard stretch of shrubs and trees, so-called because it attracts a curiously high number of migratory birds. Over 300 species of birds have been recorded at Montrose Point Bird Sanctuary and the adjacent Montrose Beach Dunes Natural Area, making it an internationally recognized area for birding. Important migrants include most species of warblers seen in the Chicago area, thrushes, sparrows, purple martins, woodpeckers, owls, and many others. “The Magic Hedge” at Montrose Point Bird Sanctuary did not just appear on its own. In the mid-20th century, the Army leased land at Montrose and built two barracks. Honeysuckle was planted to screen them from public view. Long after the Army left, the honeysuckle, now known to be an invasive species, remained and still forms much of the structure of The Magic Hedge. Ecological enhancements to the area first began in the 1980s, with the introduction of bird-friendly native shrubs such as nannyberry, serviceberry, and sumac. In 2015, the Chicago Park District created the Montrose Point Bird Sanctuary Master Plan to help guide future management of the site. The bird sanctuary increased in size in 2017 with the creation of a butterfly meadow at the west end of the site. In 2021, the Chicago Park District installed an accessible 1/3 mile long loop that travels near several popular birding locations including the Magic Hedge, Magic Clump, and the Tangle.

Funny story about this spotting. We were late season and late in the day and weren't seeing many birds (although we could hear them). Then we happened to come along behind a guy who was making bird calls and tossing out what I think was popcorn (see last photo), and lo-and-behold, out came the birds. Needless to say, we followed him for a while. I wonder about the ethics of feeding them in a sanctuary though.