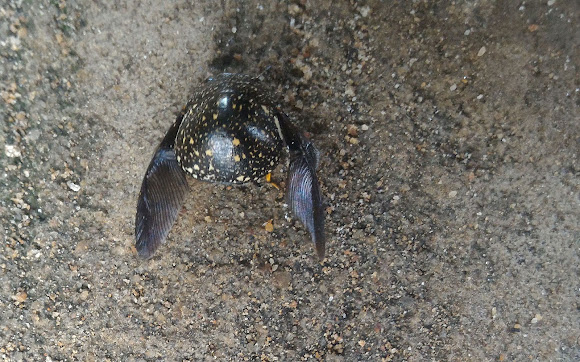 ... um. Its round, its black, it appears to have wing cases closed and wings open. The black is speckled with orange and white and it appears to have orange legs. very bulbous in shape, not just round horozontally, but almost vertically as well.

Seen on a rock ledge in a rural street.

I have no idea... this little thing just appeared and then dissapeared under a rock. This is the only picture I got, i was just standing around waiting for my ride to come and I saw this little thing go along the ledge and under a rock. At first I thought it was ants dragging something dead along the ledge and I didnt' pay too much attention, only suddenly i realised it was self powered and alive and I took a photo... and then it was gone.