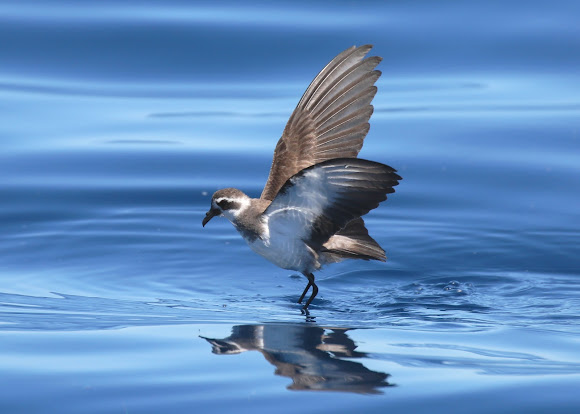 NZ sub species. Fairly large for a storm petrel with a wing span of 42-43cm and weighing in at 40-70g. Predominately light brown dorsal surface with a brown collar, tail and flight primaries are darker. White belly, flanks and underwing with light brown streaking along sides. A white face with dark brown stripe running from behind the eye. Toe wedding is white/yellow. In this sub species the rump is light grey.

This sub-species is an endemic breeder to New Zealand, breeding on smaller rat free off shore islands around the whole country including off the Chathams. This sub migrates to eastern tropical Pacific between Ecuador and the Galapagos Islands. These birds were seen feeding in the northern part of the Hauraki Gulf in Northern New Zealand.

Often seen paddling across the surface of the sea in large feeding flocks. The Maori name is Takahikare which means "Wave Stomper" among other things.

Thank you for your comment armadeus.4, you are most welcome.

Thank you Polilla. Its crazy and although the water looks so calm we were actually in a 2-4 meter swell! The birds make it look so effortless.

Thank you Mark, thank you Hema.