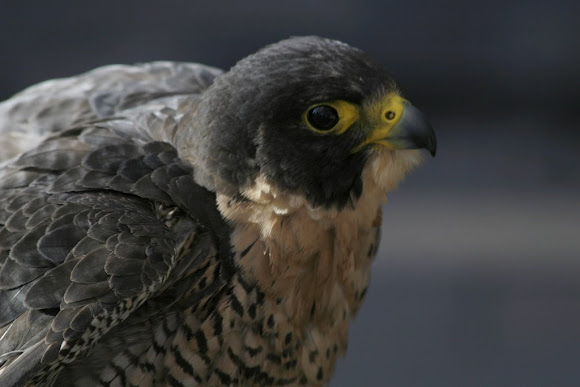 The Peregrine Falcon (Falco peregrinus), also known as the Peregrine, and historically as the Duck Hawk in North America, is a widespread bird of prey in the family Falconidae. A large, crow-sized falcon, it has a blue-grey back, barred white underparts, and a black head and "moustache". As is typical of bird-eating raptors, Peregrine Falcons are sexually dimorphic, females being considerably larger than males. The Peregrine is renowned for its speed, reaching over 322 km/h (200 mph) during its characteristic hunting stoop (high speed dive), making it the fastest member of the animal kingdom.(Wikipedia)

The Peregrine's breeding range includes land regions from the Arctic tundra to the tropics. It can be found nearly everywhere on Earth, except extreme polar regions, very high mountains, and most tropical rainforests; the only major ice-free landmass from which it is entirely absent is New Zealand. This makes it the world's most widespread raptor and one of the most widely found bird species. In fact, the only land-based bird species found over a larger geographic area is not always naturally occurring but one widely introduced by humans, (wikipedia)

Saw this bird in Colorado at a wildlife exhibit

Wonderful portrait John. It might be a good idea to take out all those little reference numbers in brackets from Wikipedia.