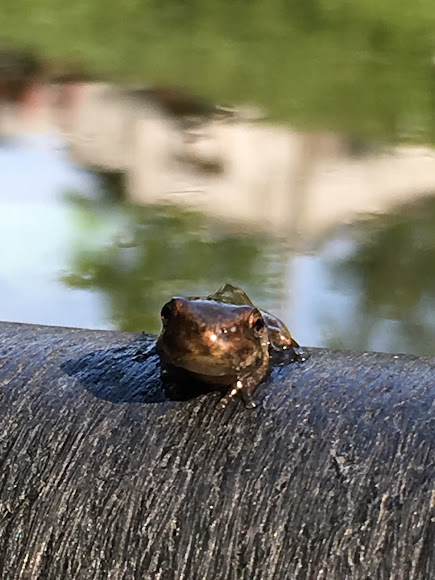 A tadpole (also called a pollywog) is the larval stage in the life cycle of an amphibian, particularly that of a frog or toad. They are usually wholly aquatic, though some species have tadpoles that are terrestrial. When first hatched from the egg they have a more or less globular body, a laterally compressed tail and internal or external gills. As they grow they undergo metamorphosis, during which process they grow limbs, develop lungs and reabsorb the tail. Most tadpoles are herbivorous and during metamorphosis the mouth and internal organs are rearranged to prepare for an adult carnivorous lifestyle. Having no hard parts, it might be expected that fossil tadpoles would not exist. However, traces of biofilms have been preserved and fossil tadpoles have been found dating back to the Miocene. Tadpoles are eaten in some parts of the world and are mentioned in folk tales and used as a symbol in ancient Egyptian numerals.

In a horse water trough.

Living quite happily, in my horse water trough. They are here every summer. Not sure what type of frog the parents are, but, I have a fun time watching them morph into froggies...and the horses don't seem to mind them either!! ;)