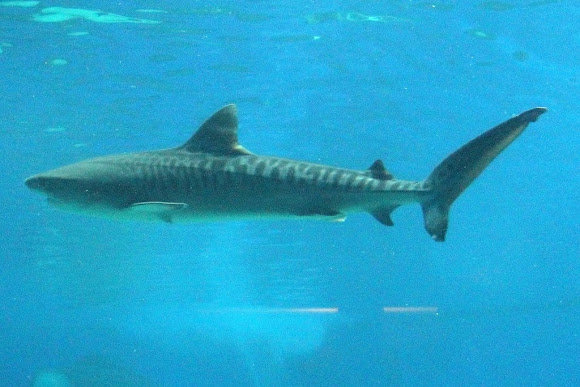 The tiger shark, Galeocerdo cuvier, is a species of requiem shark and the only member of the genus Galeocerdo. Commonly known as sea tiger, the tiger shark is a relatively large macropredator, capable of attaining a length of over 5 m (16 ft).[3] It is found in many tropical and temperate waters, and it is especially common around central Pacific islands. Its name derives from the dark stripes down its body which resemble a tiger's pattern, which fade as the shark mature(wikipedia)

The tiger shark is a solitary, mostly nocturnal hunter. Its diet includes a wide variety of prey, ranging from crustaceans, fish, seals, birds, squid, turtles, and sea snakes to dolphins and even other smaller sharks. Due to its tendency to swallow virtually anything it encounters, including non-edible manmade objects that linger in its stomach, the tiger shark has been nicknamed "the garbage can of the sea".[5] The tiger shark is considered a near threatened species due to finning and fishing by humans

Saw this shark in the Maui aquarium.