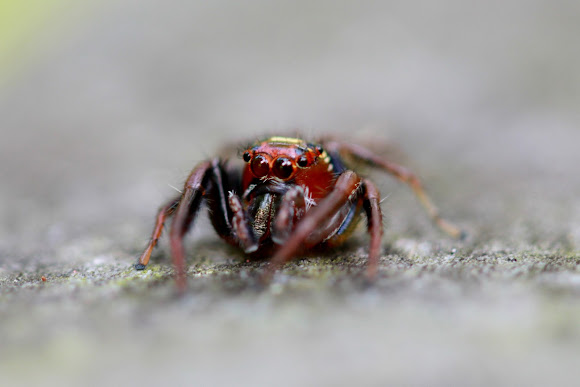 Jumping spiders are among the easiest to distinguish from similar spider families because of the shape of the cephalothorax and their eye patterns. The families closest to Salticidae in general appearance are the Corinnidae (distinguished also by prominent spines on the back four legs), the Oxyopidae (the lynx spiders, distinguished by very prominent spines on all legs), and the Thomisidae (the crab spiders, distinguished by their front four legs, which are very long and powerful). None of these families however, has eyes that resemble those of the Salticidae. Conversely, the legs of jumping spiders are not covered with any very prominent spines. Their front four legs generally are larger than the hind four, but not as dramatically so as those of the crab spiders, nor are they held in the outstretched-arms attitude characteristic of the Thomisidae.[4] In spite of the length of their front legs, Salticidae depend on their rear legs for jumping. The generally larger front legs are used partly to assist in grasping prey,[5] and in some species, the front legs and pedipalps are used in species-recognition signalling. The jumping spiders, unlike the other families, have faces that are roughly rectangular surfaces perpendicular to their direction of motion. Their eye pattern is the clearest single identifying characteristic. They have eight eyes, as illustrated.[4][5] Most diagnostic are the front row of four eyes, in which the anterior median pair are more dramatically prominent than any other spider eyes apart from the posterior median eyes of the Deinopidae. There is, however, a radical functional difference between the major (AME) eyes of Salticidae and the major (PME) eyes of the Deinopidae; the large posterior eyes of Deinopidae are adapted mainly to vision in dim light, whereas the large anterior eyes of Salticidae are adapted to detailed, three-dimensional vision for purposes of estimating the range, direction, and nature of potential prey, permitting the spider to direct its attacking leaps with great precision. The anterior lateral eyes, though large, are smaller than the AME and provide a wider forward field of vision. The rear row of four eyes may be described as strongly bent, or as being rearranged into two rows, with two large posterior lateral eyes furthest back. They serve for lateral vision. The posterior median eyes also have been shifted out laterally, almost as far as the posterior lateral eyes. They are usually much smaller than the posterior lateral eyes and there is doubt about whether they are at all functional in many species. Jumping spiders range in size from a body length of 1 to 22 mm.[4] In addition to using their silk for safety lines while jumping, they also build silken "pup tents", where they shelter from bad weather and sleep at night. They molt within these shelters, build and store egg cases within them, and also spend the winter in them.[6]

Jumping spiders live in a variety of habitats. Tropical forests harbor the most species, but they are also found in temperate forests, scrub lands, deserts, intertidal zones, and mountainous regions. Euophrys omnisuperstes is the species reported to have been collected at the highest elevation, on the slopes of Mount Everest

Jumping spiders are generally diurnal, active hunters. Their well-developed internal hydraulic system extends their limbs by altering the pressure of body fluid (hemolymph) within them. This enables the spiders to jump without having large muscular legs like a grasshopper. Most jumping spiders can jump several times the length of their bodies. When a jumping spider is moving from place to place, and especially just before it jumps, it tethers a filament of silk (or 'dragline') to whatever it is standing on to protect itself if the jump should fail.[6] Should it fall, for example if the prey shakes it off, it climbs back up the silk tether. Some species, such as Portia, will actually let themselves down to attack prey such as a web spider apparently secure in the middle of its web. Like many other spiders that leave practically continuous silk trails, jumping spiders impregnate the silk line with pheromones that play a role in social and reproductive communication, and possibly in navigation. Certain species of jumping spiders have been shown by experiment to be capable of learning, recognizing, and remembering colors, and adapting their hunting behavior accordingly.[10] [edit] Hunting Jumping spider feeding on a predatory robber fly larger than itself, and which might have eaten it instead, given a chance. The hunting behaviour of the Salticidae is confusingly varied compared to that of most spiders in other families.[11] Salticids hunt diurnally as a rule, which is consistent with their highly developed visual system. When it detects potential prey, a jumping spider typically begins orienting itself by swivelling its cephalothorax to bring the anterior median eyes to bear. It then moves its abdomen into line with its cephalothorax. After that, it might spend some time inspecting the object of its attention and determining whether a camouflaged or doubtful item of prey is promising, before it starts to stalk slowly forward. When close enough, the spider pauses to attach a dragline, then springs onto the prey. There are, though, many variations on the theme and many surprising aspects. For one thing, salticids do not necessarily follow a straight path in approaching prey. They may follow a circuitous course, sometimes even a course that takes the hunter through regions from which the prey is not visible. Such complex adaptive behaviour is hard to reconcile with an organism that has such a tiny brain, but some jumping spiders, in particular some species of Portia, can negotiate long detours from one bush down to the ground, then up the stem of another bush to capture a prey item on a particular leaf. Such behaviour still is the subject of research.[11] Some salticid species are continually on the move, stopping periodically to look around for prey, which they then stalk immediately. Others spend more time scanning their surroundings from one position, actively stalking any prey they detect. Members of the genus Phaeacius take that strategy to extremes; they sit on a tree trunk, facing downwards and rarely do any stalking, but simply lunge down on any prey items that pass close before them.[11] Some Salticidae specialise in particular classes of prey. Ants comprise one such class. Most spiders, including most salticids, avoid worker ants, but several species not only eat them as a primary item in their diets, but also employ specialised attack techniques — Corythalia canosa for example, circles round to the front of the ant and grabs it over the back of its head. Such myrmecophagous species, however, will not necessarily refuse other prey items, and will routinely catch flies and similar prey in the usual salticid fashion, without the special precautions they apply in hunting dangerous prey such as ants. Ants offer the advantages of being plentiful prey items for which there is little competition from other predators, but it remains profitable to catch less hazardous prey when it presents itself.[11] Some of the most surprising hunting behaviour occurs among the araneophagous Salticidae, and it varies greatly in method. Many of the spider-hunting species quite commonly will attack other spiders, whether fellow salticids or not, in the same way as any other prey, but some kinds resort to web invasion; nonspecialists such as Phidippus audax sometimes attack prey ensnared in webs, basically in acts of kleptoparasitism — sometimes they leap onto and eat the web occupant itself, or simply walk over the web for that purpose.