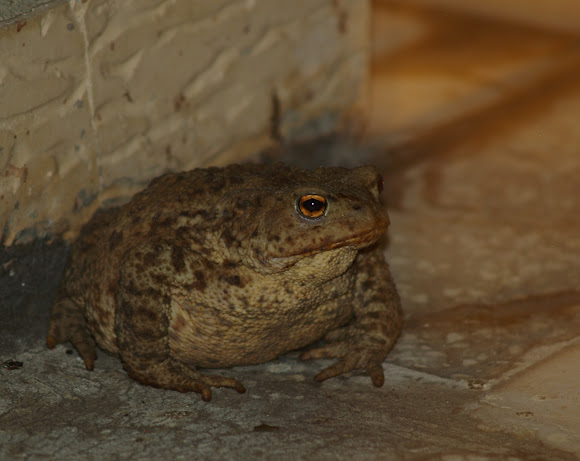 The common toad, European toad or in Anglophone parts of Europe, simply the toad (Bufo bufo, from Latin bufo "toad"), is an amphibian found throughout most of Europe (with the exception of Ireland, Iceland, and some Mediterranean islands), in the western part of North Asia, and in a small portion of Northwest Africa. It is one of a group of closely related animals that are descended from a common ancestral line of toads and which form a species complex. The toad is an inconspicuous animal as it usually lies hidden during the day. It becomes active at dusk and spends the night hunting for the invertebrates on which it feeds. It moves with a slow ungainly walk or short jumps and has greyish brown skin covered with wart-like lumps.

The common toad is found at altitudes of up to 2,500 meters (8,200 ft) in the southern part of its range. It is largely found in forested areas with coniferous, deciduous and mixed woodland, especially in wet locations. It also inhabits open countryside, fields, copses, parks and gardens, and often occurs in dry areas well away from standing water.