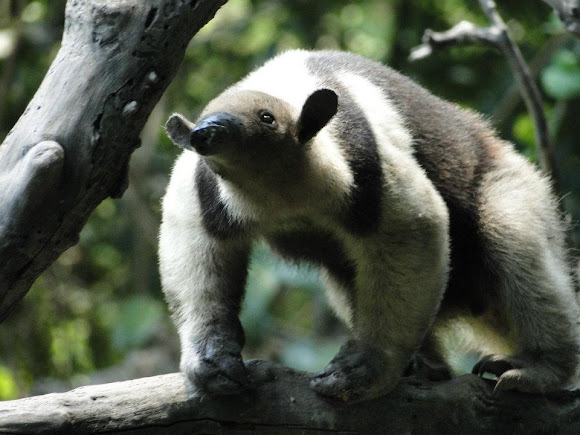 Tamandua mexicana is much smaller than giant anteaters (Myrmecophaga tridactyla). Head and body length ranges from 470 to 770 mm and tail length from 402 to 672 mm. Northern tamanduas are fawn to brownish colored and have a distinct, black "V" going down their backs. One of their names, vested anteaters, is derived from this "V" as it makes the anteater appear to be wearing a vest. Northern tamanduas always have this vivid, black "vest" on their trunk that continues from the shoulders to the rump. Southern tamanduas, northern tamandua's closest relative, only has this "V" in some specimens from the southeastern portion of their range, the part of their range which is farthest from the range of northern tamanduas. Sometimes the two species can only be distinguished by characters of the skull.

T. mexicana ranges from southern Mexico in the north of its range, through Central America as far south as northwestern Peru and northwestern Venezuela. It ranges from sea level to 2,000 m asl, although most sightings have been recorded from areas below 1,000 m asl. T. mexicana is found in tropical and subtropical dry and moist forest, including mixed deciduous and evergreen habitats. It can also be found in mangroves and grassland with some trees. It can survive in secondary forests and in disturbed habitats.

I appreciate your comments Alice and Ceherzog!!!

What a funny face..love him/her!

Thanks a lot Cranbrook and Gerardo!!!

You´re welcome Kevin, thanks for your comment. Good taht you liked.

Awesome pictures. Never seen one o' these before. THANKS!

Thanks for your comments people, KarenL this tamandua its a wild animal, i will add a note.

What a cute animal!!

THANKS MATIMAR 1, YOU MAKE ME HAPPY WITH YOUR COMMENT :)

I SAW IT IN APRIL OF LAST YEAR, ONE YEAR AGO.

What a beautiful spotting!

When'd you run into him?