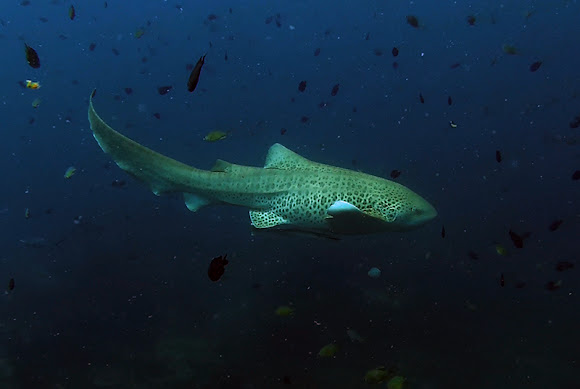 Adults have five longitudinal ridges on a whole body, a low caudal fin over almost half the animal length, and a pattern of dark spots on a pale background. Young zebra sharks under 50–90 cm have a completely different pattern, consisting of light vertical stripes on a brown background, and lack the ridges. They grow to the lenght about 2.5 m

Found this one on the swiming near to the reef at the depth of aboot 10-12 meters.

Zebra shark is taken commercialy by fisherman across most of its range. Other threats is degradation of their coral reef habitat by human development, and by destructive fishing practices such as dynamiting or poisoning. As a result, the World Conservation Union has assessed this species as Vulnerable.

Congratulations to you Marek & your magnificent shark !

Congrats on the spotting! This is sa-weet.

Beautiul series Marek,congrats on the well deserved SOD and thanks for sharing

Congratulations Marek, your beautiful Zebra Shark is our Spotting of the Day!

"A beautiful Zebra Shark (Stegostoma fasciatum) swims close to shallow reef in our Spotting of the Day! Also known as Leopard Shark, this species has distinctive dark leopard-like spots as an adult. Juveniles are distinguished from adults by their markings of narrow white stripes and blotches, from which the alternative common name of Zebra Shark originates. The Zebra sharks is taken by commercial fisheries across most of its range, and is susceptible to localized depletion. It is also threatened by degradation to coral reef habitats. Because of this it is classified as Endangered on the IUCN Red List of Threatened Species. More information here: https://buff.ly/2xa92jk "

Thank you for a nomination :)

Lovely and peaceful ! I hope they get some protection.