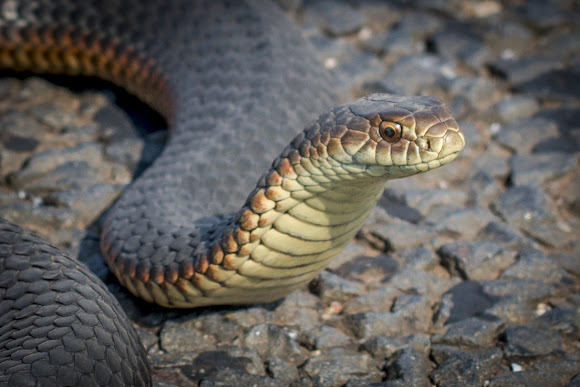 bright iris and a narrow, somewhat pointed head which is scarcely distinct from the neck. The colour ranges from slate grey or black to coppery red-brown through to deep brick-red on the upper surface. It is usually yellow-white underneath... adult copperheads have a prominent orange/red to brown streak running along the lower sides of the body.The ventral scales often have dark margins. Adults reach 1 m to 1.5 m in length.

The lowland copperhead prefers to live in swampy or marshy areas where it feeds on frogs, lizards and smaller snakes.

Thankyou all for the congrats and third placing for reptiles PN =)

What a sweet face. Congrats!

Congratulations Charlie, this great close-up placed 3rd in our 2016 Best Photo contest in the Reptile category!

Congrats on your SOTD. This is a beauty :)

Thanks António , just joined the 2016 mission and updated :)

White lipped next Mark ..i have spotted them , just not got a picture YET! :)

Congrats again Charlie,now on the well deserved SOTD,you should add your spottings to the new mission http://www.projectnoah.org/missions/2004... for chosing the best's wild photos of 2016,congrats and thanks for sharing

Thankyou for the SOTD Lisa and PN Rangers =)

So pleased you have all enjoyed seeing this gorgeous specimen , appreciate all the wonderful comments . :)

Awesome series CharliePrice,congrats and thanks for sharing

What a nice spotting!
Great job!

Congratulations Charlie!!! That is a very healthy looking specimen. Wonderful spotting. Thank you for sharing :)

Congratulations CharliePrice! This lowland copperhead from Tasmania, Australia is our mesmerizing Spot of the Day!