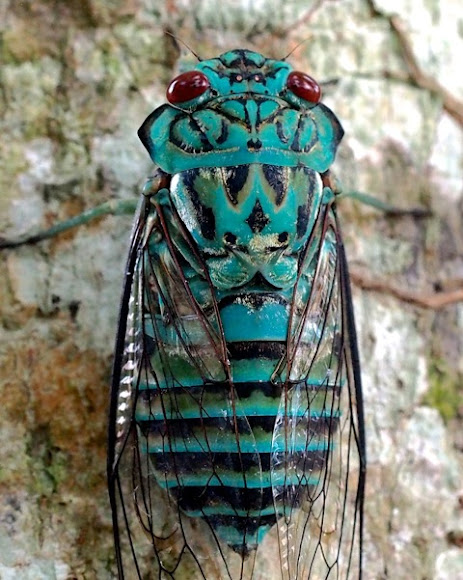 Zammara is a genus of cicadas. They are large cicadas that are generally bright blue-green in color. The other ones I have seen either alive, or in photos on the web, mostly seem to have black eyes. I think that the red eyes on this one are spectacular...

Zammara are found in the Neotropics, especially in equatorial regions,where they live in tropical forest habitat.

thank you Felix and Polilla... much appreciated.

thanks Robert, Leuba and Michael

Congratulations to you and your Cicada,Pam !

Nice one Pam. Congrats on your 2nd place. Well deserved.

Thank you so much Daniele and the PN Rangers, I am blown away by this win ! And thank you so much AntónioGinjaGinja for suggesting I enter it into the best photo of 2016 mission. "You have to be in it to win it" as the saying goes ! Never entered my mind that I had a chance of wining !!

Congratulations Pam, this beautiful cicada came 2nd in our 2016 Best Photo contest in the Arthropods category!

Beautiful detail on your spotting, Pamsai

What an amazing cicada! Great find Pam. A beautiful work of art by Mother Nature.

thanks Leuba. Those eyes are amazing. The ones I saw in Costa Rica 2 years before, had black eyes.

thanks Jason... I only took the photo, it's nature that is so wonderful, isn't it !?

thanks Antonio, I have added it to that mission.

Gorgeous capture Pam,you should add your spottings to the new mission http://www.projectnoah.org/missions/2004... for chosing the best's wild photos of 2016,congrats and thanks for sharing such a beautiful creature

Yes Viv, or American Indian jewellry, or Tibetan turquoise. But definitely the colour of old turquoise.

:0 The colours made me think of Mexican turquoise

Well, that's funny: I sent my comment without reading the other ones. Two are nearly the same ;-).

thanks Viv... I changed the date to the correct one !!