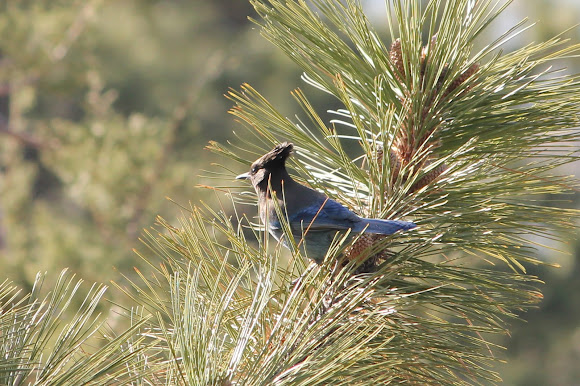 Blue and black Jay, with a crest on the front and back. Rounded wings with black tips.

Found near cabin's in Big Bear. Would fly from tree tops to the ground and eventually would disappear to the bottom of the balcony in one cabin. Found flying around caring twigs and on occasion pieces of paper.

"Steller's and Blue jays are the only North American jays with crests. The Blue Jay is expanding its range westward. Where they meet, the two species occasionally interbreed and produce hybrids." "Steller’s Jays have the dubious honor of being one of the most frequently misspelled names in all of bird watching. Up close, the bird’s dazzling mix of azure and blue is certainly stellar, but that’s not how you spell their name. Steller’s Jays were discovered on an Alaskan island in 1741 by Georg Steller, a naturalist on a Russian explorer’s ship. When a scientist officially described the species, in 1788, they named it after him – along with other discoveries including the Steller’s sea lion and Steller’s Sea-Eagle." - allaboutbirds.org/guide/stellers_jay/lifehistory