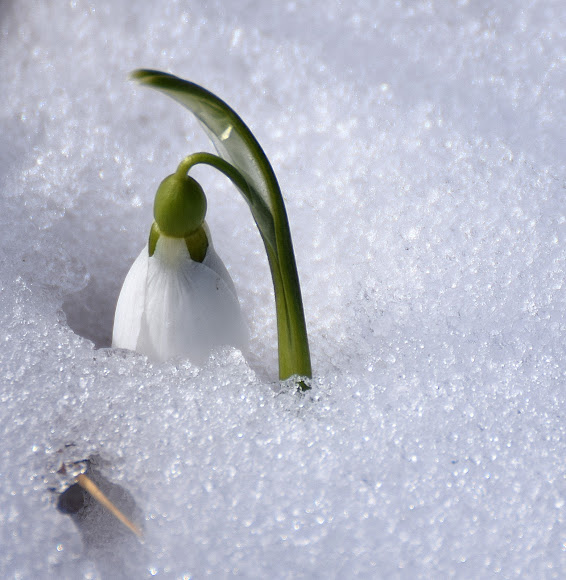 Giant snowdrop, Galanthus elwesii, a native of the Levant, 23 cm tall, flowering January/February, with large flowers, the three inner segments of which often have a much larger and more conspicuous green blotch (or blotches) than the more common kinds; supervolute vernation. All species of Galanthus are perennial, herbaceous plants which grow from bulbs. Each bulb generally produces just two or three linear leaves and an erect, leafless scape (flowering stalk), which bears at the top a pair of bract-like spathe valves joined by a papery membrane. From between them emerges a solitary, pendulous, bell-shaped white flower, held on a slender pedicel. The flower has no petals: it consists of six tepals, the outer three being larger and more convex than the inner series. The six anthers open by pores or short slits. The ovary is three-celled, ripening into a three-celled capsule. Each whitish seed has a small, fleshy tail (elaiosome) containing substances attractive to ants which distribute the seeds. The leaves die back a few weeks after the flowers have faded.

Great images Kostas. Does exactly as it says on the packet, a Snow Drop indeed! :) Congratulations on your second place.

Thank you all for the honor, your comments and support!

Congratulations Kostas, this beautiful snowdrop came second in the Plant category in our 2016 Best Photo contest!

Congrats Costas for the SOTD! Slightly late though! Beautiful clear white. I've managed to take a similar one popping out of the snow, but it's a Primula!

Congratulations Kostas, this beautiful series of a Giant Snowdrop our Spotting of the Day!