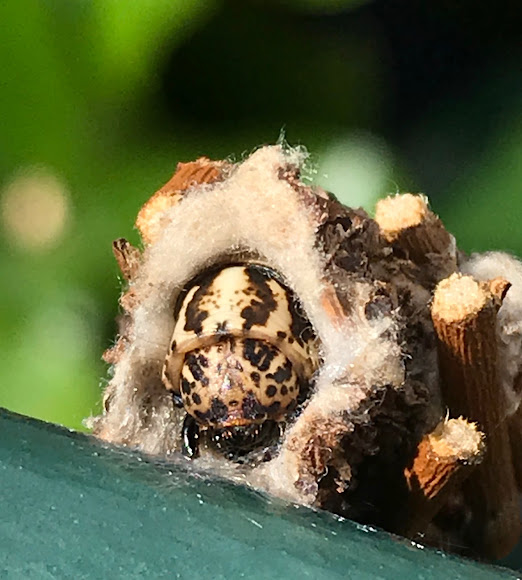 The caterpillar larvae of the Psychidae construct cases out of silk and environmental materials such as sand, soil, lichen, or plant materials. These cases are attached to rocks, trees or fences while resting or during their pupa stage, but are otherwise mobile. The larvae of some species eat lichen, while others prefer green leaves. In many species, the adult females lack wings and are therefore difficult to identify accurately. Case-bearer cases are usually much smaller, flimsier, and consist mainly of silk, while bagworm "bags" resemble caddisfly cases in their outward appearance – a mass of (mainly) plant detritus spun together with silk on the inside. Bagworm cases range in size from less than 1 cm to 15 cm among some tropical species. Each species makes a case particular to its species, making the case more useful to identify the species than the creature itself. Cases among the more primitive species are flat. More specialized species exhibit a greater variety of case size, shape, and composition, usually narrowing on both ends. The attachment substance used to affix the bag to host plant, or structure, can be very strong, and in some case require a great deal of force to remove given the relative size and weight of the actual "bag" structure itself. Body markings are rare. Adult females of many bagworm species have only vestigial wings, legs, and mouthparts. In some species, parthenogenesis is known. The adult males of most species are strong fliers with well-developed wings and feathery antennae but survive only long enough to reproduce due to underdeveloped mouthparts that prevent them from feeding. Their wings have few of the scales characteristic of most moths, instead having a thin covering of hairs.

Our garden in Windwardside at the foot of MountScenery, a volcano on Saba in the Caribbean Sea.

I first spotted this Bagworm Moth case on Dec 21. See spotting https://www.projectnoah.org/spottings/10... It had disappeared for a few weeks and suddenly it was back! It did add more small sticks to it's "bag". This time I did see it move and could even take a video (which for some reason I can not post here) of it doing its thing! YIPPPEEE!!!

Always great to see the caterpillar at work. I love the assemblage of textures and reinforcements near the opening. Lovely spotting as usual Muckpuk.

I know! So excited!

How cool that you were able to get shots of the caterpillar - great spotting! Congratulations!

I was so happy Mark Ridgway, but then the winds arrived and it is gone again. Not sure if it is a male and will come out or if it is a female staying in her bag laying eggs. Let's hope it pops up someday again.