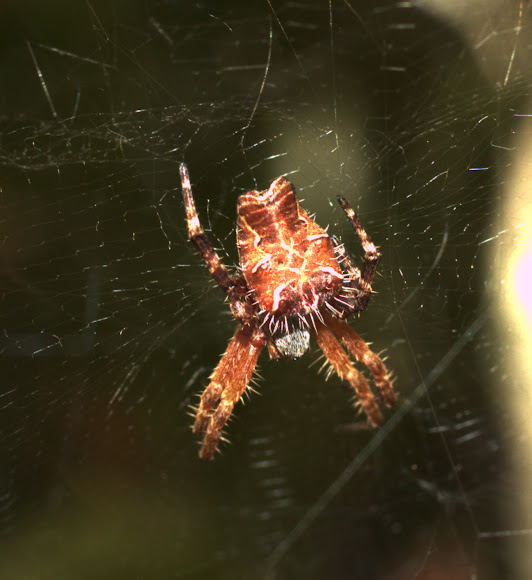 Found a whole colony of these spiders. Very variable in color, size and the webs are tents suspended on a network of links between the various webs. The tent part of the web is extremely finely woven. In photo 2 the spider is sitting on an egg casing.

The only species of the genus Cyrtophora in South Africa is the cosmopolitan tropical tent-web spider, Cyrtophora citricola. The web is a-typical, in that it is similar to mesh curtaining, which forms the orb section of the web, and the spider spends both day and night on it. The orb-web is supported by numerous knock-down threads that form a tent, and these deflect prey onto the orb-web. The radials are indistinguishable from the spiral and the web has no viscid properties. Cyrtophora citricola can occur in large numbers with webs connected, often in aloes, each spider adhering to its space. The spider, 15-20mm body length, is cream coloured with distinct rounded projections on the abdomen. The spider normally hangs below the central section and the remains of prey and egg sacs make it difficult to see. If disturbed, this spider drops to the ground and the colour changes to black. Once adult, males usually stop eating and using webs. They will seek out receptive females, mate and then die shortly after. The female produces one to three cocoons of eggs after which she may die or live long enough to guard her offspring. The effectiveness of the mechanism of the claws for holding onto silk strands was demonstrated when a paper wasp immobilised a spider and spent more than an hour trying to free it. (http://www.biodiversityexplorer.org/arac...)