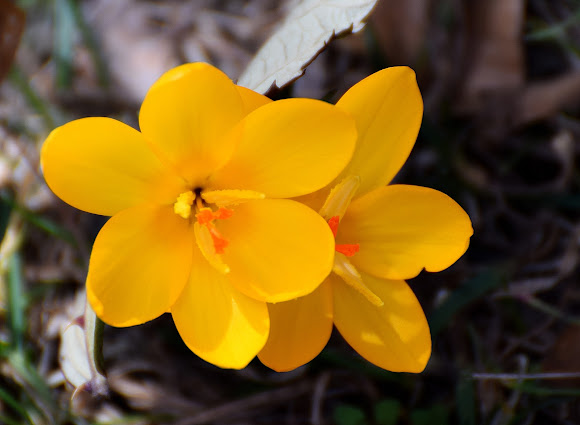 Crocus chrysanthus (snow crocus, golden crocus) is a species of flowering plant of the Crocus genus in the family Iridaceae. Native to the Balkans and Turkey, it bears vivid orange-yellow bowl-shaped flowers. It has smaller corms and a smaller flower than the giant Dutch crocus (Crocus vernus), although it produces more flowers per bulb than the latter. Its common name, "snow crocus", derives from its exceptionally early flowering period, blooming about two weeks before the giant crocus, and often emerging through the snow in late winter or early spring. The leaves are narrow with a silver central stripe. Height: 3–4 inches (7.6–10.2 cm).

Spotted in a meadow at mount Chortiatis (Thessaloniki, Greece).