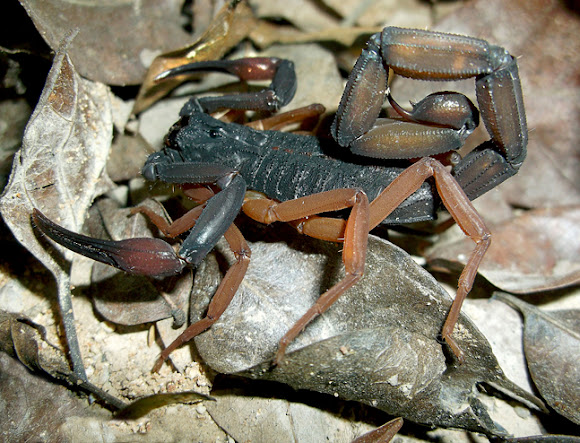 This scorpion would have been about 5" with tail outstretched, although that never happened. In photo #2 you can see where I caught it, at midnight in the bathroom, and #3 was taken by settling the camera on the wall and taking a mug shot. Then I caught the scorpion in a drinking glass and took it outside and released it on the forest floor litter. Using my flashlight to focus, I took #4 when I first put it down, with its tail still raised high and tightly coiled, ready to strike. Photo #1 was taken after it relaxed a bit.

My house is nestled in the rainforest of the foothills of the Maya Mountains, in western Belize, and I occasionally find scorpions on the inside and outside walls and floor of the house. I catch and release them outside.

I'm going to make a guess that this is Centruroides gracilis, the Florida Bark Scorpion, also known as the Brown Bark Scorpion, and the Slender Brown Scorpion, as it matches the size and description I found in Wikipedia — and is a common scorpion here in Belize.