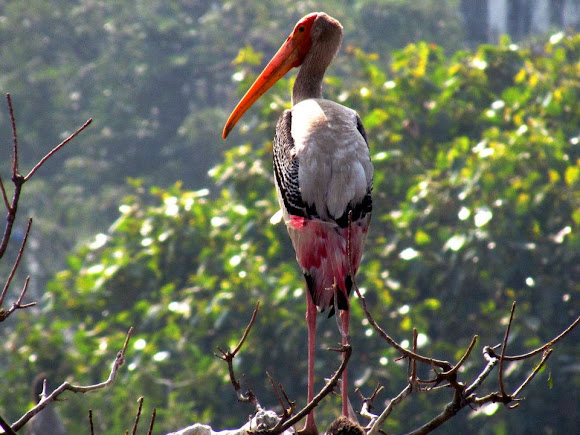 The Painted stork of India is a tall and slim bird, which grows to a height of 95 to 100 cm. The bird is mostly white in color, with the exception of its wings and chest feathers that have black and white markings. The color of the lower back, along with the legs, is light pink. The head of the Painted storks is only partly covered with feathers and is orange in color. The bill is long, yellow in color and curves towards the end. The female Painted stork is a little smaller than the male. The young ones are Grey-brown in color . Only after they become three years old, do they get adult feathers . Full maturity comes around the age of four years. Indian Painted Stork Painted storks of India prefer to eat fish, which also forms a major portion of their diet. However, at times, they consume frogs and snails also. When hunting, the stork puts its head inside the water, with its bill being partly open. The bird keeps swinging its head back and forth in the water, till it catches a prey. Natural Habitat Painted storks are seen occupying Indian freshwater marshes, ponds and flooded fields. Painted Storks are found mostly in large colonies and stay near water. The nests, made up of sticks and leaves, are built close to the edge of the water.

Colony of painted stork was spotted in Bhavnagar(Gujrat,India) and they were having nests made up of sticks on a tall tree..

Thanks saswat.
Added to mission