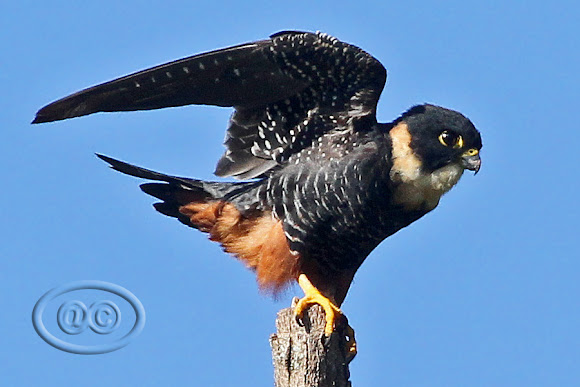 It is a small bird in the Falconidae family, also known in Brazil as "cauré-i", "coleirinha", "falcão-de-garganta-branca", "falcão-morcegueiro", "gavião-de-coleira" and "tentenzinho". Mesuring about 26 centimeters, the male weigh 120 grama and female, 200 grams, it is small, black, with chest and striped belly and has throat, craw and sides of neck, rustiness, yellow or white, with bottom part of abdomen, brown. When young, has lower tail coverts yellow and barred black. Capture their prey with skill, both in flight - bats, insects and birds - and on the ground - mice and small lizards. It is a skilled hunter. At dusk catch bats and moths; day catch dragonflies, grasshoppers, mice, lizards and some birds such as swifts (Apodidae family) and aracaris. Source: WikiAves (See Reference)

It has wide distribution in the Neotropics, occurring from Mexico to northeastern Argentina (Sick, 1997). In Brazil, it occurs more frequently in the Amazon, Midwest and Southeast (Sick, 1997), having few records documented in northeast and southern Brazil (Meller, 2013; Just et al 2015.).

It varies unusual and common in some regions inhabited edges of forests and glades. solitary lives or in pairs, spending most of the time perched on poles and on top of dead trees.