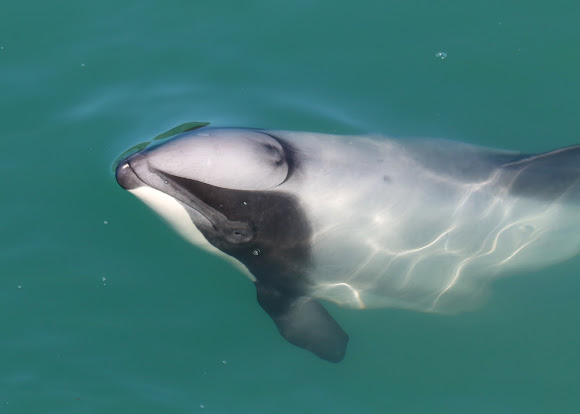 Found only in the South Island of New Zealand in coastal and estuarine habitats in generally murky water. They feed on shallow water/bottom living fish, cuttlefish, shrimp and other small crustaceans. Although small in size this species has to feed constantly to maintain its metabolic rate. This small pod was spotted in Akaroa Harbour, just east of Christchurch in New Zealand South Island.

This endangered species is very prone to getting entangled in set nets, commonly placed in NZ harbours and will drown in 4 minutes if caught. There is only an estimated 7,000 of these dolphins left on the planet and although the New Zealand Government has created marine reserves the population is still in decline albeit at a slower rate. Females become sexually mature between 7-9 years old and reproduce with a single calf every 2-3 years. They live to about 20 years old so any recovery in numbers is going to be slow! The last image shows a mother with a very small calf.

Thanks Jason. I Got lucky with that image!

I love the 4th pic! Awesome!

Wow, so I am not the only nutter out there doing that?! ;)

Yeah! I love Sir David Attenborough and I agree...he has set the benchmark rather high which means we can aim as high as we want! I must admit...whenever I go out and about I do sometimes put on my David Attenborough voice as I skulk around for critters :D

My pleasure Liana. We have A pop up channel over here at the moment that is showing all Sir David Attenborough programmes. All 12 series. Watching them is an absolute inspiration and makes me just want to try harder and push myself further.

I love learning about the endangered animals...gives me the urge to get out there and keep on documenting! Thank you for sharing Rob :)

Thank you Polilla, Luba and Ashutosh. Was very lucky to see the tiny calf Polilla. It will be a long haul for them as a species but they now have a high profile in NZ so hopefully they will get looked after and numbers will build.

Beautiful looking creatures and great set of photos ( especially the first one). Thanks TriggsTurner. I hope their numbers increase and people look out for them.